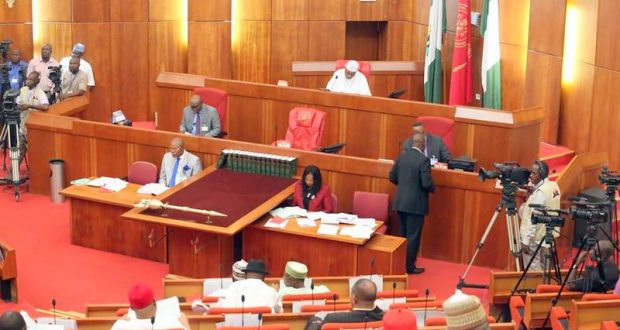 The Senate has rejected the nominee from Zamfara, Ahmad Mahmud, as Resident Electoral Commissioner (REC).

The Senate however, confirmed the nominees from Lagos State and Kebbi states, Rufus Akeju and Mahmuda Isah, respectively.

This followed the consideration of the report of the Committee on Independent National Electoral Commission (INEC), which was presented by its Chairman, Suleiman Nazif, at plenary.

Nazif said that the nominees appeared before the Committee in May, 2017.

He said that after careful study of the nominees’ documents, the committee found those from Lagos and Kebbi suitable for the position of Resident Electoral Commissioner, but had to step down that of Zamfara.

In his contribution, Adamu Aliero APC Senator representing Kebbi said that it was true that they initially had reservation on the nomination of the nominee from Kebbi, but that the issues were later resolved.

According to him, after due consultation with the relevant authorities in the state and other stakeholders, we resolved to allow the nomination. We are in support of his nomination.

Similarly, another Senator of the APC, Kabiru Marafa from Zamfara said, “I don’t accept the statement that after careful deliberations and consultations, the nominee from Zamfara was rejected.

With all sense of modesty, I am a critical stakeholder in Zamfara politics; nobody consulted me.”

“These nominations are entirely the exclusive right of President Muhammadu Buhari and no other person.

“I respect the state governor and his views as to why he took some actions. At the same time, we are Senators and by our oath, we are supposed to live above board.

“I was not consulted about this gentleman. I don’t see the sufficient reason for his rejection; I oppose his rejection completely for want of evidence,” Marafa said.

Another Zamfara Senator, Tijjani Kaura also of the APC said that he was totally in support of the Committee’s decision in rejecting the nominee.

“The reason is that Ahmad Mahmud is not an indigene of Zamfara even though he hails from Sokoto.

Previous: Whether Buhari is from Katsina or not, PDP will win the state in 2019 – Tsauri
Next: SGF heads National Burial Committee for Ekwueme