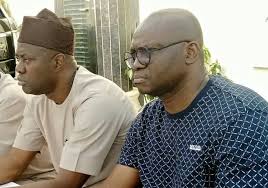 Rift between Makinde, Fayose not a serious one- PDP Senator

He added that the rift would not last be because it just a merei individualinterest that will soon be over.

He said that the clash Is not as serious as many people think, saying that it would be settled ahead of the convention of the party.

“There is no political rivalry between the two. When Fayose was 60 years old, Makinke really celebrated him. All that is going on is just politics. After the coming convention in February, you’ll see that they will embrace each other.

“Makinde is the leader of the party in the south west because he is the sitting governor. Nobody is fighting on that.

“Makinde cannot have his way unilaterally. I’m a senator. We have five senators from the party. He should have called us to. We’re human beings. I’m even older than him, I’m 61. I’ve been to four universities in my lifetime. He’s not studying the way I studied.

“After the election, that type of thing will stop because there will be a sitting chairman in charge of the six states, so he’ll be able to manage it well. When Eddy Olafeso was the National Vice Chairman, there was no crisis in any of the states. It was very smooth

Previous: Politicians who fail to fulfil promises have no business in public offices- Wike
Next: Buhari has nothing to offer, he wants to lie till 2023- Junaid