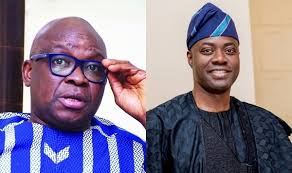 A faction of the Peoples’ Democratic Party in Ekiti loyal to Senator Biodun Olujimi has reiterated its loyalty to the leadership of Oyo State Governor, Seyi Makinde in the southwest chapter.

The party which stated that the governor remained the undisputable PDP leader in the zone, dissociated itself from the statement credited to former Governor Ayodele Fayose-led faction, attacking Makinde.

Acccording to Punch, the faction had attacked Makinde for positioning himself as the party leader in the southwest, alleging that he was an agent of All Progressive Congress (APC) destabilizing the chapter.

It also alleged that Makinde was behind the preponderance of lawsuits against the party in both Ekiti and Osun states to please his paymasters as a payback for the support he got during his election.

But, Olujimi’s factions urged Fayose to stop leadership tussle with Makinde and retrace his steps, adding that there was no leadership vacuum in the southwest.

The party, in a statement signed by the factional Publicity Secretary, Chief Sanya Adesua said the party’s constitution conferred leadership on Makinde being the highest-ranking officer in the zone, adding that Fayose enjoyed the same privilege when he was in the saddle.

“We are using this medium to appeal to all our leaders across the Southwest Zone, especially those who are aggrieved for one reason or another, to please give peace a chance in the best interest of the party and the populace.”

“Gov. Seyi Makinde is the leader of PDP in Southwest and the Ekiti State Chapter is solidly behind him. This is not to say that former Governor Ayo Fayose can be wished away in the scheme of things as one of the party leaders in the zone, but he should understand that he does not own the party.

“And as such, should respect the existing political organogram/arrangements which he once benefitted from, as the only elected PDP Governor in the zone between 2014 and 2018.

“What we expect from him is to give Gov Makinde the same support he enjoyed from PDP leaders across the zone when he (Fayose) was at the helms of affairs instead of working against the progress of the party,” it said.

The party debunked allegations against Makinde that he was the one sponsoring the litigations instituted against Fayose’s faction, describing it as laughable.

“These spurious allegations confirmed our suspicion that Fayose decided to move against Gov Makinde when he couldn’t get him to support his unconstitutional takeover of the party structure in Ekiti State.

“For emphasis, those being paraded by Fayose as representatives of Ekiti PDP SWC are merely members of his Osoko Political Assembly (OPA), an association, who must dance to only his tunes.

“So, whatever it does or any decision taken by any of them or by all of them does not represent the position of Ekiti State PDP, rather a sole decision of Mr. Ayo Fayose as an individual,” it added

Previous: Tinubu’s political dexterity helped APC in 2015, 2019- Bakare
Next: We have not given up in the impeachment process of Buhari- Chinda