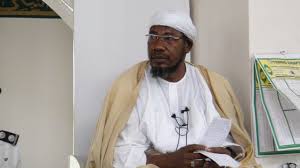 The main opposition, the Peoples Democratic Party Governors Forum, has lent its voice on the controversial sack of  of the former Chief Imam of the National Assembly Legislators’ Quarters Mosque, Sheikh Muhammad Khalid.

The opportunity party described it a dangerous trend of Fascism perpetrated by the All Progressives Congress-led government.

The condemnation was contained in a statement signed on Monday by its National Publicity Secretary, Debo Ologunagba, titled ‘Clampdown on Muslim cleric: PDP warns APC on fascism,’

The party lamented thatt the APC is more concerned with 2023 elections than the welfare and security of Nigerians.

“The clampdown on Sheikh Khalid is reminiscent of the days of the obnoxious Military Decree 4 of 1984, under General Muhammadu Buhari, as Head of State, when telling the truth was categorised as a crime. Those days are scaringly creeping back!

“Sheikh Khalid, in his sermon, clearly expressed the frustration and concerns of millions of Nigerians across the country irrespective of religious, ethnic, and political leanings.

“Is Sheikh Khalid not stating the facts when he stated that ‘everything is not working well. People are dying; our roads are not secured. Most of the part of the country is not secured?’” the statement read.

According to the party,  rather than clamp down on free speech, APC should  reassure the people by taking decisive actions against terrorism and worsening insecurity.

“While the PDP refrains from delving into religious issues, our party cautions the APC to note that suppressing the concerns of citizens and resorting to fascist measures where constitutionally guaranteed freedom of expression is being brazenly assaulted is capable of triggering widespread social restiveness and escalating the already tensed situation in the country.

Read Also
“This APC’s recourse to an onslaught on the voice of citizens as witnessed in the clampdown on religious leaders, the opposition, the civil society, and the media indicates an unacceptable descent to tyranny and imposition of a siege mentality to suppress dissenting voices in the face of the APC’s manifest failure.

“This is the character of fascism which is gradually creeping into our country under the APC and now deoxygenating our citizens’ exercise of their freedom of expression as guaranteed under the Constitution of the Federal Republic of Nigeria 1999 (as amended),” the PDP noted.

Previous: 2023 Presidency: Group describes Osinbajo as the Moses of Nigeria
Next: 2023: I expect younger politicians to deliver Nigeria- IBB