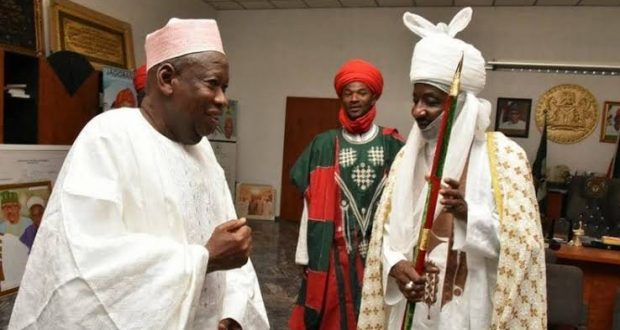 Sanusi was appointed Emir of Kano to spite Jonathan- Ganduje

Governor Abdullahi Ganduje has explained why he had to take the bull by the horn to dethrone Muhammad Sanusi as the Emir of Kano.

Acccording to the Governor, Sanusi, was removed from office so that the sacred system of traditional institution will be saved from abuse.

He gave this explanation during the  presentation of a book on the former president by Bonaventure Philips Melah, a journalist.

It will be recalled that Ganduje booted out Sanusi as Emir of Kanoon March 9 following lingering feud between the duo.

He added that Sanusi’s appointment had Political undertone as he was  appointed to spite ex-President Goodluck Jonathan.

He said: “Jonathan,  in sacking Sanusi as CBN governor, created bad blood in certain circles. When Sanusi said $49 billion was lost in Jonathan’s government, I said in my mind that no, you could have discussed with him (Jonathan) privately.

“You could have given him this clue and then he would know how to investigate even before those who had stolen the money would find a way of hiding the money.