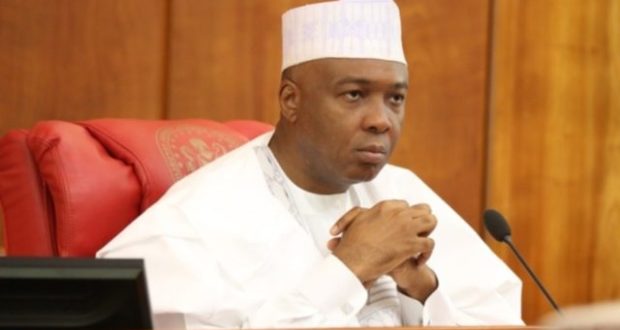 Saraki gives reasons why he did not challenge 2019 election results

Ex-President of the Senate, Dr. Abubakar Bukola Saraki, has stated the reasons why he did not challenge the results of the 2019 general elections at the Tribunal despite the irregularities he noticed.

According to him, he had to calm  his angry supporters and told them to maintain peace because “the lives of our people, the stability of our democracy and the peace of the society are more important than our personal interest or the inflated egos of the leaders.”

Saraki called on President Muhammadu Buhari and the 9th National Assembly to prioritize the reforms of the electoral system.

He called for a legislation to stop the deployment of military personnel for election duties.

The ex-Senate President who is also the Chairman of the Politeia Institute, made these assertions in his speech during a webinar to mark the 2020 International Democracy Day with the theme: Electoral Reforms and Democracy” organised by the Centre for Advancement of Civil Liberties.

He called on Buhari to use the Edo and Ondo elections to demonstrate ECOWAS commitment to credible electoral process.

Saraki said: “It is also important to stress that democracy can only grow if those of us who are politicians get ready to play by the rules at all times.

“Politicians must stop the mentality of electoral victory at all cost. The stability of the nation’s democracy and peace of the nation are definitely higher goals than the personal aspiration of individual politicians.

“Politicians must learn to always act in a manner that gives confidence to the people that truly, elections still provide the best process for sourcing leaders and kicking out those that are not wanted by the people.

“I want to also quickly point out that I am eminently qualified to pontificate on this, as I can use myself as an example.

“I went into elections in 2019 in Kwara State, our party, the People’s Democratic Party (PDP), and myself, lost the elections.

“We had our reservations on the credibility of the entire electoral process. We had good evidence of the illegal deployment of state forces and other undemocratic means to achieve the results declared by the electoral body.

“The whole country witnessed the level of desperation displayed by those who could not tolerate our guts to turn the election results against us.

“The utterances of the former chairman of the All Progressives Congress (APC), Adams Oshiomhole, who continuously boasted about how his number one priority and objective was to win Kwara State by whatever means necessary, were well documented.

“After the result of the 2019 elections was announced, I sent out messages to my followers, despite their anger and quest to express their grievances, that they should accept the result and maintain peace.

“I then congratulated the winners and urged our people to support the newly elected officials.

“To further demonstrate good faith and gracefulness in defeat, I refused to challenge the process at the tribunal.

“With this experience, I believe one is in a good need for political actors to sometimes suppress the desire for power and take side with the survival of the system.

“When I argue that politicians should learn to accept election results and demonstrate patriotism even in the face of naked provocation, it is based on my experience.

“The lives of our people, the stability of our democracy and the peace of the society are more important than our personal interest or the inflated egos of the leaders.

“Let me at this point also mention that next Saturday, four days away, the Edo Governorship Elections will be taking place.

“Also, on October 10, another gubernatorial election will hold in Ondo State. This should be a starting point for our demand for a credible electoral process.

“Whilst we wait for the new Electoral Bill to be passed, we can begin to demand that the right things are done by all stakeholders in these elections.

“Led by President Muhammadu Buhari, we can ensure that these two elections signpost his desire to leave for Nigeria and Africa a legacy of a true democracy and clean electoral process.

“President Buhari must use the Edo and Ondo elections to demonstrate ECOWAS commitment to credible electoral process.

“The President must put his feet down and ensure that the security agencies will, and must, not be misused to influence the results of the elections in Edo and Ondo States.

“Also, the electoral commission should be made to be truly immune from manipulations by individuals, no matter how highly placed.

“Already the international community has given a verdict on some of the recent elections by the sanctions announced by the United States yesterday.

“We, as a country, can’t continue to pretend all is well. We must demonstrate seriousness and take a cue from this strong message and use these coming elections to make corrections.

“The President can also send a message to the National Assembly when the members resume later in the month that he wants them to present to him a new Electoral Bill for assent before the end of the year.

“This is easily achievable and will send a strong message to the international community that the government is taking this matter with the seriousness it deserves.

“The present COVID-19 era has presented us with more challenges and we should refrain from aggravating the situation by undermining democracy or weakening the electoral process.

“Our people are more prone to reacting negatively to developments that deny them of their rights to freely choose their leaders. Nigeria cannot afford any political crisis now that it has serious economic and security challenges.

“Let us not push the people to the tipping point. We