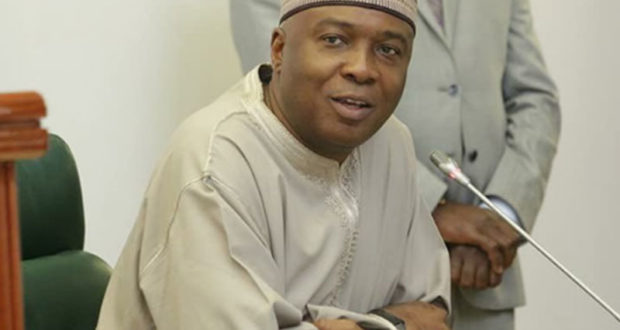 Saraki to Oshiomhole: You predicted the fall of others, your own downfall has come

Bukola Saraki, ex-President of the Senate, has severely lacerated Adams Oshiomhole for the events that led to the defection of Governor Godwin Obaseki of Edo State to the Democratic Party, PDP.

Speaking  through his media aide, Yusuph Olaniyonu, welcomed Obaseki to the PDP., adding that

The former Governor of Kwara State said Oshiomhole will soon meet his waterloo.

Saraki added that the fate of the suspended APC Chairman should serve as a lesson to all politicians.

Obaseki dumped the APC days after he was disqualified from contesting the governorship primary election on its platform.

Saraki, however, applauded the PDP governors for their roles in ensuring that Obaseki defected to the party.

The statement read in part: “The truth is always constant and no matter how far falsehood travels, the truth will catch up with it one day.

“What is happening to Oshimhole now is a moment of truth. This same man who was garrulously proclaiming the end of the political career of some other people is now about to meet his waterloo.

“He has continued to use his mouth to divide his party and I believe there is a lesson for all politicians to learn from the fate of the suspended APC chairman.

“No autocrat can successfully pretend to be a Democrat. The true character of a man will come out one day,” Saraki added

Previous: APC Crisis: Giadom refuses to give up, writes letter to INEC
Next: Obaseki’s defection a will of God- PDP Chairman