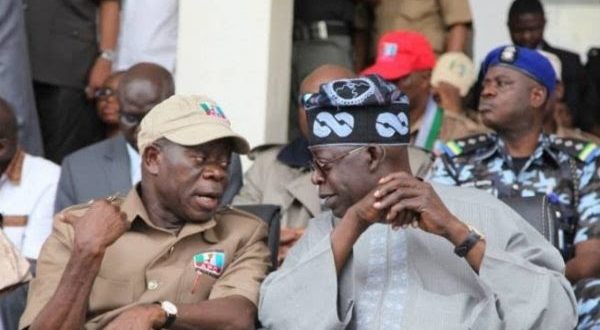 “Save APC’s soul from dungeon of Oshiomhole,” 12 chieftains cry to Tinubu

Twelve chieftains of the All Progressives Congress (APC) in a statement has cried out to the National Leader of the party over the way  Adams Oshiomhole is piloting the affairs of the ruling party,

In the statement, the concerned members  lamented that Oshiomhole has killed  democracy in the party

In a statement on Thursday, the chieftains  said Oshiomhole’s recent actions as regards the forthcoming election in Edo state is not in line with party’s constitution.

They said Oshiomhole lacks the power to give Osagie Ize-Iyamu, an Edo governorship aspirant, waiver to run for the party’s ticket or to write to the independent National Electoral Commission (INEC) that party had adopted direct primary mode before a decision was taken by the national working committee (NWC).

They therefore called on Bola Tinubu, a national leader of the party to save the soul of APC from the dungeon of.   Oshiomhole.

“It is against this background that we believe that Asiwaju Bola Tinubu has a historic duty to come out and assure party members and indeed the Nigerian citizens that he still stands on the pillars of equity, fairness and justice,” they said.

“Let us not be misunderstood. We are not in any way, suggesting that Asiwaju jumps into the fray in the many of the festering and lingering internal disagreements within the APC, requiring reconciliation.

“However, we expect that by now he should be able to provide incontestably fair leadership to all party members, through which some specific actions of the APC national chairman Comrade Adams Oshiomhole can be moderated and made to conform with internal due processes as provided in the provisions of the APC constitution.

“Comrade Oshiomhole has murdered democracy in the APC. As democrats, we believe that such actions are reprehensible and condemnable. No leadership will condone such illegal actions that can only undermine the democratic ethos upon which APC stands.”

They said the APC is inadvertently giving the Peoples Democratic Party (PDP) oxygen with the way the party operates currently.

“We are inadvertently giving oxygen to the PDP, a failed political formation that we thought we had castrated in 2015,” politicians said.

“However, can there be a reconciliation in an atmosphere of impunity perpetrated by the national chairman of APC, which could not have been possible without the tacit green light from the National leader himself?

“We find it bewildering that just within a space of one month, Comrade Adams Oshiomhole had serially and violently violated the APC constitution that the silence of Asiwaju, the national leader is disconcerting.”

Previous: EFCC lied, they did not recover N7.9bn from me- Okorocha
Next: Why Nigerians should not forget June 12 struggles- APC chieftain