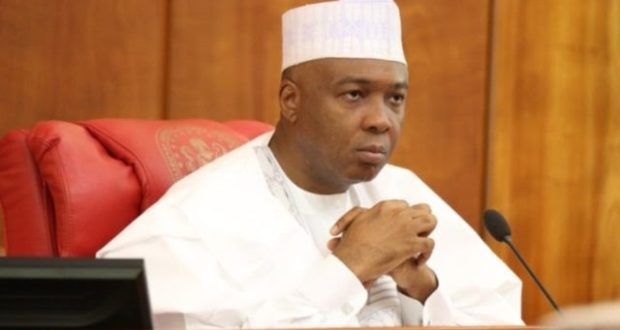 The National Chairman of the Peoples Democratic Party, PDP, Prince Uche Secondus says that Bukola Saraki, ex-Senate President protected Nigeria from collapsing during his time as leader of the senate.

Secondus made this intimation while felicitating with Saraki on his 57th birthday.

In a statement he personally signed, Secondus declared that the PDP was very happy with the outstanding roles of Saraki towards ensuring democratic stability in Nigeria.

According to the PDP National Chairman: “On behalf of the National Executive Committee, celebrates former President of the Senate, Senator Olubukola Saraki, as he marks his 57th birthday.

“The PDP is exceedingly proud of Senator Saraki for his innumerable sacrifices towards the unity, stability and development of our nation, as well as his outstanding roles in the struggle for the restoration of democratic tenets in our country.

“Senator Saraki remains an exceptional patriot whose track record of performance as a medical doctor, state governor, President of the Senate and Chairman of the National Assembly and later Director General of PDP 2019 Presidential Campaign Organization, stand him out as one of the contemporary leading lights of our nation.

“Senator Saraki’s tenure as the governor of Kwara state was marked by resounding legacies that repositioned the state for greater productively in critical sectors, for which he remains one of the best governors Kwara state ever produced

“As the Chairman of the National Assembly, Senator Saraki courageously asserted the independence of the legislative arm in defending the interest and wellbeing of Nigerians as well as protecting our democracy and national cohesion from collapse during our nation’s most trying moments in recent history.”

Secondus insisted that PDP was also proud of the resilience, skill and proficiency with which Senator Saraki led the most popular Presidential campaign which, in an unprecedented manner, galvanized Nigerians in their collective quest, under our Presidential Candidate, Atiku Abubakar, to rescue our dear nation from misrule.

“Our party therefore salutes this icon of democracy, a detribalized Nigerian and quintessential leader as he attain 57 years of age and prays God to bless him with more years in good health to continue in his selfless service to our dear nation,” he added.