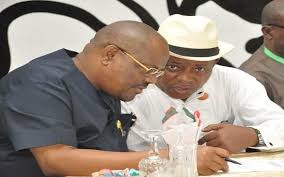 Acccording to the outspoken Governor, the NWC should be held responsible for the schism in the party.

Wike lamented that the NWC is endangering the Electoral chance of PDP ahead of 2023 general elections, adding that it is causing cracks among the Governors

The Governor made this remark in a on a live television programme in Port Harcourt on Friday.

He said: “PDP ought to have harvested from the inefficiency of the APC; from the misadministration of the APC. Ordinarily, that is what the opposition party ought to do. If you ask me, are Nigerians waiting for a change? Yes.

“If you ask me as a member of PDP, am ready to support PDP to takeover, yes. But, if you ask me currently as it is, is the leadership of the party willing for us to harvest this opportunity for a change, I will say no.”

He said: “An opposition party that ought to be united, to work, to take over the affairs of government because people are waiting for this opportunity, but the current leadership of NWC is not prepared for that, rather, what they have done is to constitute some people to sow a seed of discord among governors for their own selfish interest. And that will boomerang; that will consume them.”

He vowed never to decamp to APC or any other political party adding that he would stay to make PDP stronger.

“The present National Working Committee is not interested or doing anything to take over the realms of government in 2023. When your interest is to remain in power, you are no longer interested to win the election,” he said.

Previous: Buhari vs Reps: Nobody is in charge of Nigeria now- Secondus
Next: PDP promises to hand over its leadership structures to youths