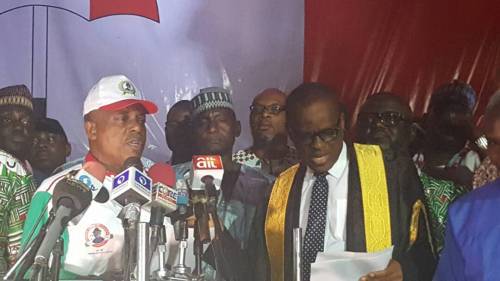 Secondus sworn in as new PDP Chairman, says APC is not a political party

Uche Secondus has been sworn in as the new National Chairman of the Peoples Democratic Party, PDP.

His oath of office was conducted by Eyitayo Jegede, a legal practitioner and governorship candidate of the PDP in the last governorship election of Ondo state.

Secondus in his acceptance speech, called for a new beginning in the PDP while describing others who contested the position of the Chairmanship as equally competent to lead the party. He called on those who were aggrieved by the process which culminated in his election as the party’s Chairman to join hands with him to make the PDP a first choice for Nigerians in the period leading to the 2019 general elections.

He said among other things that the PDP, would reclaim its lost glory by winning the 2019 polls and described the All Progressives Congress, APC, as an association of people with selfish interests rather than a political party which only came together for the purpose of winning the 2015 elections and did nothing to better the lives of Nigerians more than two years after taken over power.

Secondus was widely favoured by Rivers Governor, Nyesom Wike for the position.

Wike and his Ekiti counterpart, were accused by Adeniran and Dokpesi to have doctored the outcome of the election.

Wike had since replied his accusers, saying the governors reserved the right to vote for who they want as Chairman of the party.

Previous: Fresh crisis looms as Wike, Fayose emerge new power brokers in PDP
Next: The brief tenancy of APC in Aso Rock Villa will expire on May 28, 2019 – Secondus