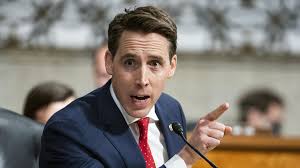 Sen. Josh Hawley on Wednesday pledged to challenge President-elect Joe Biden’s victory in Pennsylvania and possibly other states on Jan. 6, when Congress is set to certify the results of the 2020 election.

The Missouri Republican’s announcement guarantees that both chambers will be forced to debate the results of at least one state and vote on whether to accept Biden’s victory, a process that Senate Majority Leader Mitch McConnell had urged Republicans to avoid, despite pressure from President Donald Trump, who is urging Republicans to overturn the democratic results.

Though Hawley’s challenge will have no bearing on the ultimate outcome of the election — numerous GOP senators have accepted Biden as president-elect — it will delay the certification of Biden’s victory and force every member of the House and Senate on the record affirming Biden’s win. Hawley said Wednesday that other senators’ offices had reached out to express interest in a challenge but he’s not sure if any will join.

“I would think that there will be more but there may be not be,” Hawley said.

Hawley, who said he alerted GOP leaders before announcing his intentions, also declined to say how many states he would challenge. “We’ll see about that, we’re working out the logistics of it,” he said.

Senate Republican leaders, including McConnell, have sternly warned against challenging the election because it would split the party and be viewed as a referendum on Trump. Already, the president has come after Senate Majority Whip John Thune (R-S.D.) for his warnings that the effort would go down like a “shot dog” if a senator moves with House members to force votes.

Asked if he expected to be less popular in the conference, Hawley responded: “More than I already am?”

“I do not think that he will prevail in his quest. And I question why he is doing it when the courts have unanimously thrown out the suits that the president’s team have filed for lack of credible evidence,” she said. “And Sen. Hawley’s a smart attorney who clerked for the Supreme Court, so he clearly understands that. So I don’t understand.”

Collins said she would “absolutely” vote to certify the election “unless there’s some very unexpected revelation which I cannot imagine will occur.

Prior to Hawley’s pronouncement, all eyes had been on Sen.-elect Tommy Tuberville (R-Ala.), who had signaled his willingness to support a challenge to Biden’s victory. Trump had praised Tuberville and blasted other Republicans as “weak,” threatening to end the political career of Thune who told reporters that any challenges were doomed to defeat.

Other GOP senators shrugged off Hawley’s plans Wednesday, with some saying the evidence just doesn’t exist to change the election results.

“My plan at this point is to vote to accept the votes of the Electoral College,” said Sen. Shelley Moore Capito (R-W.V.). “There’s not enough to overturn that.”

“We’ll see what he has to say but my belief is that although I didn’t like the outcome of the election, the election is over,” said Sen. Richard Shelby (R-Ala.).

Others said they’d wait and see what Hawley presents in support of his challenge.

“I’m curious to see the evidence they have,” said Sen. John Cornyn (R-Texas). “I was a judge for 13 years. I’m used to making decisions based on the facts and evidence but so far I haven’t heard it.”

The traditional rules of the Jan. 6 session — a joint meeting of the House and Senate — require a single House member and senator to join together to lodge a challenge. If they do, the branches are required to separate and debate the challenge before resuming the joint session.

Dozens of House Republicans have already pledged to challenge the results but had yet to secure unequivocal support from a senator.

Only a handful of elected Republicans — including Rep. Adam Kinzinger of Illinois, who has become a prominent critic of Trump’s effort to flip the election results — openly criticized Hawley. In a mock “internal monologue” for Hawley, Kinzinger imagined the senator saying: “I want to be President so I decided to try to get POTUS tweet saying I’m great even though I know this isn’t going anywhere, but hey … I’ll blame someone else when it fails.”

House Republicans who had already pledged to contest the results celebrated Hawley’s announcement, declaring it proof of a “contested election” even though there’s no evidence of fraud or misconduct that influenced the results in any state.

Previous: Buhari should not be blamed on insecurity, he inherited it from PDP- APC chieftain
Next: Yakassai explains why North rejected 1956 Independence motion