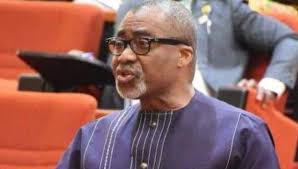 He didn’t just leave the opposition party, he  also resigned as the Minority Leader in the upper legislative house.

It will be recalled that Abaribe  withdrew from the PDP governorship primaries on Tuesday.

The Senator confirmed his withdrawals  in a letter to the ward chairman of the PDP in the Obingwa Local Government Area of Abia State and the President of the Senate in the National Assembly, Ahmed Lawan.

Abaribe gave ‘illegality, impunity, and hesitations in decision-making’ as reasons for dumping the PDP.

“This development is consequent upon the shameful display of illegality, impunity and undemocratic decision of the party and after due consultations with my constituents.” he added.

In another letter written to Senator Lawan Ahmed on Friday dumping the party, he said “This is to notify you and my dear colleagues in the Senate that I have formally resigned my membership of the Peoples Democratic Party through my ward. This also means my resignation as (the) Minority Leader of the Senate.