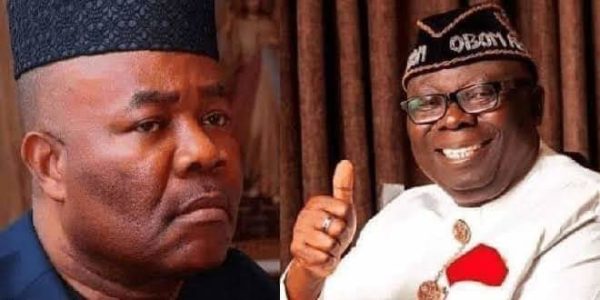 Delivering judgment, the Chairman of the three-member panel, Justice W.O. Akanbi, held that Ekpenyong, a member of the Peoples Democratic Party (PDP), was duly elected by majority votes cast during the Feb. 23, 2019 senatorial election.

However, one out of the three judges ruled contrary to his two colleagues in the panel.

The panel through a majority decision dismissed the petition filed by Sen. Godswill Akpabio of the All Progressives Congress (APC), challenging the declaration of Ekpenyong by the Independent National Electoral Commission (INEC) as winner of the said election.

Describing the petition as “lacking merit”, the panel noted that the petitioner failed to prove that he won the said election as well as failed to present convincing evidence of noncompliance to Electoral Act as raised in his petition.

Akpabio had alleged that INEC, in collaboration with some PDP chieftains in the senatorial district, wrongfully declared Ekpeyong and his party, the PDP, winner of the poll, having scored 118,215 as against Akpabio’s 83,158.He said result sheets from Akwa Ibom INEC office showed different figures that had him (Akpabio) securing 138,256 votes as against Ekpeyong’s 123,843.