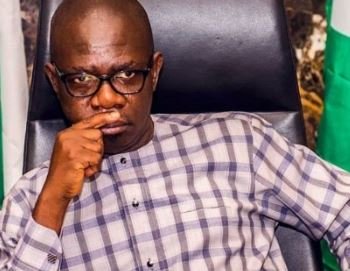 “Serve one term and hand over to a core PDP loyalist,” PDP gives condition to Ondo dep gov

Peoples Democratic Party has listed listed fresh conditions for Ondo State Deputy Governor Agboola Ajayi, before he will be allowed to run for governor on the party’s platform.

It was gathered that part of the conditions is for Ajayi to agree to serve one term and hand over to a core PDP loyalist.

This is just as some aspirants, who have purchased the nomination and expression of interest forms, have vowed never to step down for Ajayi.

Ajayi and Governor Oluwarotimi Akeredolu have parted ways politically over the former’s ambition to contest against his boss.

A PDP chieftain, who pleaded anonymity, said Ajayi is expected to formally announce his defection this week and will not resign as deputy governor.

The chieftain noted that the quest for automatic ticket by Ajayi was being resisted by some aspirants.

Southwest National Vice Chairman of the PDP Eddy Olafeso has said no aspirant was prepared to step down for Ajayi.

He was responding to comments that the deputy governor might be the candidate of the party on the condition of serving only one term.

Olafeso said Agboola was not yet a member of the PDP and had not collected nomination or expression of interest forms.

Said he: “I can confirm to you that as at today, only six people have collected the PDP governorship form for the election. Erewa, Okunomo, Ayorinde, Jegede, Eddy and Oba Akingboye.

“In the tradition of PDP, it is only the delegates who determine who becomes their governor. You can check the interview of our national chairman of yesterday.

He has already established that while we encourage people to join us, due process is constantly followed in whatever you want to become in the party.

“The NWC has not taken any decision. People can participate, but nobody is stepping down for anybody. The decision of who becomes the governor is taken by the people.”