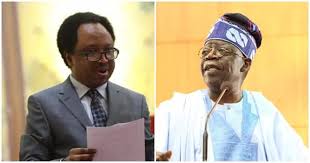 The frontline politician said this while reacting to the claim by Tinubu, that President Muhammadu Buhari would not have emerged as the president in 2015 without his support.

It will be recalled that Tinubu had yesterday claimed that without his support, President Buhari would not have won the 2015 election.

Speaking in Ogun State, Tinubu said, “If not for me that led the war from the front, Buhari would not have emerged as the president. He contested first, second and third times, but lost. He even said on television that he won’t contest again.

“But I went to his home in Katsina, I told him you would contest and win, but you won’t joke with the matters of the Yorubas.

“Since he has emerged, I have not been appointed Minister. I didn’t get a contract.

“This time, it’s Yoruba’s turn and in Yoruba land, it’s my tenure.”

Reacting, Sani wrote on Twitter: “Actually, Jagaban has played a leading role in the emergence and victory of PMB in 2015; but politics doesn’t always respect or appreciate history.”