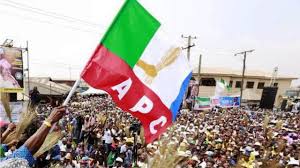 Six chieftains of the Peoples Democratic Party (PDP) in Oyibo Local Government Area of Rivers State have joined the All Progressives Congress (APC).

This is despite the deepening crisis in the party, characterised by suspensions and counter suspensions.

The defectors – Adolphus Nweke, Onyema Ihenna, Ibekwe Okere, among others – said the PDP is no better party. They hoped the party structure would become stronger after this crisis period. “We would rather be active members of the APC and partake in the dividend of the work, than answer big name and die in hardship”, they said.

The defectors were received on Wednesday by the party leader in Oyibo, Gift Okere, and caretaker committee Chairman Chamberlain Okorie, The Nation reports.

Okorie noted that the PDP in Oyibo Ward 2 has crashed following the defection of key executives to the APC. He urged the new members to work for APC’s victory in the next elections.

He admonished them on the need for unity, cooperation and hard work to ensure victory for the party, even as he assured them of huge benefit under the leadership of Transport Minister Rotimi Amaechi.

Okorie alleged the absence of government projects in the council despite the defectors’ hard work and commitment in the PDP.

He said: “PDP administration has done Oyibo people more harm than good. There is no Wike project in the council. When Rotimi Amaechi was governor, Oyibo council recorded key projects and human development programmes that posterity will be proud of.

“Your decision to join APC is a good one and you will soon confirm it. Amaechi has nothing to give you, but I assure you he will continue to fight for the entrenchment of true democracy.”