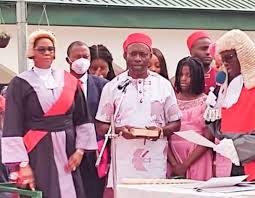 Anambra State governor-elect, Prof Chukwuma Soludo has officially received oath of office  as the Governor of the State.

The epoch-making swearing in was sdmiinistred by  the State Chief judge, Justice Onochie Anyachebelu at exactly 9:45am, at the Anambra State Government House.

It was witnessed by several dignitaries, including the out-gone governor, Chief Willie Obiano and his wife, Mrs Ebelechukwu, and all the 30 members of the Anambra State House of Assembly.

The new Governor also inspected the guard of honour, his first task as Governor of the State.

The Governor had earlier stated that immediately after the swearing-in, he would proceed to Okpoko, a sprawling slum, near Onitsha, where he would spend eight hours working to provide a better living for the people,

Previous: 2023: Nothing can intimidate out of Enugu guber race- Ekweremadu vows
Next: 2023 Presidency: Buhari told me to make my intention public- Tinubu