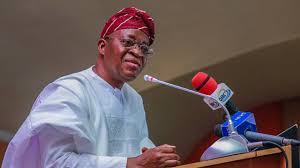 The Osun State Government has disclosed an alleged move by some individuals to sponsor campaigns of calumny against the person of the state governor, Adegboyega Oyetola.

The disclosure was made in a statement signed and made available to journalists by Ismail Omipidan, the Chief Press Secretary to the state governor.

According to the state government,  it was compelled to raise the alarm after a piece of information stating that some unscrupulous elements want to cause distractions in the state and discredit the governor.

The statement said, “The public is hereby advised to ignore such stories whenever they are out, as they are nothing but outright lies aimed at creating confusion and misinforming the unsuspecting public.”

”We are compelled to raise this alarm as an early warning sign of the clandestine scheme being put together by some unscrupulous elements to tarnish the image and reputation of the Governor, Government of Osun and to cause distractions”.

Previous: 2023 Presidency: How Buhari has destroyed the chance of Atiku- Afegbua
Next: 2023: Older politicians should allow younger persons to rule- Udo