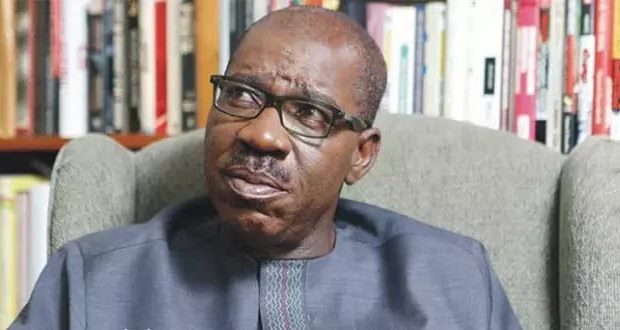 The APC leader said the meeting was illegal because the governor lacked the power to initiate it.

He said the NEC would go ahead as planned despite a contrary notice by the party’s National Legal Adviser, Babatunde Ogala and National Publicity Secretary, Mallam Lanre Issa-Onilu.

Eta, in a telephone interview with our reporter, said Obaseki invited leaders to a meeting at the Edo State Governor’s Lodge in Abuja.

He said he gathered that the meeting was to discuss issues concerning APC National Chairman Comrade Adams Oshiomhole.

Eta said: “I saw the invitation the governor is sending out to people inviting them for a meeting. I am calling on all our party leaders to shun the meeting because he has no right to convene it.

“I am the Southsouth Vice Chairman of the party and any APC leadership meeting is convened by me.

“I have also communicated to our political leader in the zone, the Deputy Senate President, Senator Ovie Omo-Agege and he is not aware of any such meeting.

“So, we are calling on all our leaders not to attend any such meeting because it is ill-conceived and ill-motivated.

“Governor Obaseki is not an officer of the party. He cannot call such a zonal meeting without my office. Consultative forum meeting is alien to our party’s constitution.

“Maybe the governor is only calling his friends to come together, but not an APC meeting. For me, no party leader from the zone will attend the meeting.”

Eta said every patriotic member of the party should be concerned about how to support the national leadership.

“At this point, we are focusing on how to strengthen our great party under the leadership of Comrade Adams Oshiomhole and not to destabilise the party.

“We urge all stakeholders, including governor Obaseki, to follow the constitution of the party which is supreme because any meeting called by him without the proper procedure is null and void,” Eta said.

Also on Wednesday, Obaseki and some party leaders disagreed over Oshiomhole’s continued stay in office.

While the APC leaders, who met in Benin, maintained that they had implicit confidence in Oshiomhole, Obaseki insisted that the “self-acclaimed” party faithful of the party had been led astray by the “suspended” national chairman

Previous: Obasa: We won’t tolerate indiscipline from any Lagos Assembly member
Next: Ihedioha hits back at gov Uzodinma over allegation of planned protest