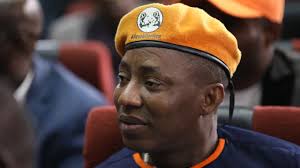 The Convener of #RevolutionNow, Omoyele Sowore, has again emerged as the presidential candidate of the African Action Congress (AAC) for the 2023 general election.

It was gathered that the  party’s delegates elected the him.as its flag bearer at its national convention on Thursday in Abuja.

Before this developments, the Publisher of Sahara Reporters had announced his decision to step down as the AAC chairman, a position he recently earned through a court judgement.

It will be recalled that am  Appeal Court in Abuja, last Thursday, upheld him as the authentic chairman of the party after several months of legal tussles with the Leonard Ezenwa-led faction of the party.

Before that period, a Federal High Court in Abuja had earlier approved the suspension and eventual sack of Mr Sowore as the AAC’s national chairman.