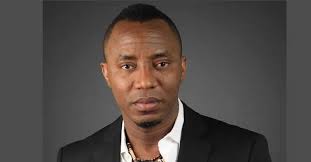 The African Action Congress, AAC, presidential candidate Omoyele Sowore and the Convener of the RevolutionNow, has called out the candidate of the Progressives Congress, APC,, and his teeming supporters over his from the country.

It will be recalled that the former Governor of Lagos and his supporters have been churning pictures of the APC candidate to prove that he is not sick as being reported widely.

Reacting in a social media platform, s, Sowore alleged that the move was to deceive the unsuspecting public.

According to Sowore declared that Nigerians would no longer be governed by politicians using photos as proof of life.

He wrote, “The era of using photos to deceive and fleece unsuspecting citizens has passed! Thanks to @MBuhari, who scammed these bogies, Nigerians can’t be fooled by these old antiquated gimmicks and antics by @officialABAT handlers. Nigerians won’t be governed by photographs anymore”.

Previous: Tinubu not in abroad to seek medical treatment- APC UK
Next: Tinubu returns to Nigeria after some days in UK