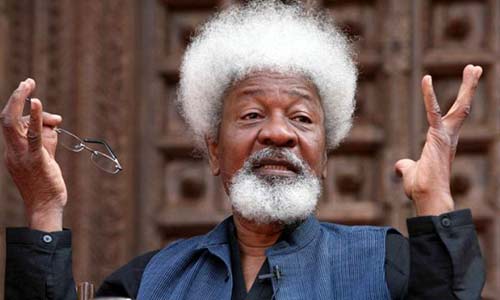 Soyinka to Garba Shehu: You are a paid errand voice working for a clueless govt

None Laureate, Prof Wole Soyinka, has hit back at Senior Special Assistant on Media and Publicity to President Muhammadu Buhari, Garba Shehu.

Shehu, speaking on behalf of the Presidency, had urged Nigerians to ignore Soyinka’s comments on the lockdown order declared by Buhari on Sunday during a broadcast.

The lockdown to take place in Lagos, Ogun and FCT, was part of wider measures adopted by government to halt the spread of Coronavirus in the country.
Shehu therefore said that Nigerians should ignore Soyinka for kicking against the move because he lacked knowledge on issues of health and science in general.

But responding on Thursday morning, Soyinka described Shehu as a paid propagandist doing the bidding of a clueless administration.

He said, “Mr, Shehu Garba failed to mention a most important profession in which I am confirmed: Alarmist. Unpaid. It’s a universal function of humanity even in the midst of the worst of crises.

“To save me the trouble of responding to the mind boggling irrelevances of paid errand voices, a professional colleague kindly sent me an affirmative article in the New York Times.

“You will understand that I cannot take issues with a propagandist whose clear mission is to distract public attention from the complex issues of health – both the physiological and the mental.”

The New York Times article referred to by Soyinka raises concern on how the global health crisis was creating an avenue for political leaders to exhibit dictatorial tendencies.

The article went on to express fear over whether the new powers acquired by heads of governments in many countries of the world including in Nigeria will be relinquished by the end of the Coronavirus pandemic.

Recall that several leading legal practitioners in Nigeria including Femi Falana had said that the lockdown order by Buhari could not stand except backed by law.

Shortly afterwards, Buhari on Monday announced the signing into law of the COVID-19 Regulations.

It was the legal framework needed to enforce the lockdown order in Lagos, Ogun and the FCT.

The order has taken effect in Lagos and FCT while it will be enforced in Ogun starting from Friday, Saharareporters reports.