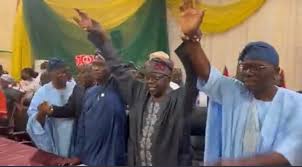 After lots of speculations surrounding the fate of Governor Babajide Sanwo-Olu’s second term ambition, the All Progressive Congress (APC) National Leader, Bola Tinubu has endorsed the Governor and his deputy, Obafemi Hamzat, for another term in Lagos State.

It was learnt that the  endorsement was made public and was witnessed by members of the powerful Governor’s Advisory Council (GAC).

It should be noted that Sanwo-Olu’s return bid has been mired in controversies and rumors that a Muslim might get the 2023 governorship ticket.

There are speculations that some stalwarts had reportedly commenced ground work for two individuals.

The individuals are Head of Service, Hakeem Muri-Okunola and Mustapha Olorunfemi, a former Permanent Secretary, Ministry of Science and Technology.

The public endorsement has now put to rest the speculations that Tinubu was against Sanwo-Olu’s second term.