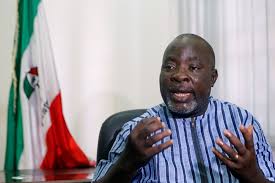 The major opposition, the Peoples Democratic Party, has made jest of the All Progressives Congress’s nationwide congress on Saturday, saying 20 states out of 36 states including the Federal Capital Territory were imploded in crisis after the crisis.

According to PDP, it’s no wonder that APC has plunged the nation into disaster.

It added that the party lacked capacity to manage its own affairs not to talk of managing the nation.

Reacting to plethora of crisis as a result of parallel congresses across the states, PDP’s National Publicity Secretary, Kola Ologbondiyan in a statement on Sunday, said “fictitious congresses of APC only manifested their greed for power and nothing else.”

He spoke about over confusion APC has created across the nation particularly on the manner with which APC leaders in a show of shame engaged physical, verbal and emotional assault of themselves.

“It is indeed despicable that a party that has the incumbent President of the country could not successfully conduct state congress, as their leaders were seen behaving recklessly and investing heavily in violence; a development that speaks volumes on why our nation has been under the heavy yoke of violence, division, bloodletting and acts of terrorism under the APC watch.”

He maintained that APC lacked leadership qualities as nobody could listen to anybody in the party fold, a situation he said, led to incoherence in party affairs.

He noted that PDP believed that APC’s crisis will badly affect the nation in many ways, particularly the nation’s unity and tranquility as the 2023 general election was fast approaching.

“Nigerians should be wary of the APC. If the APC congresses turned out this bad one can only imagine the type of mayhem that would characterize its primaries as well as their involvement in the general election.

It urged Nigerians to make a correct interpretation of the signal sent out by APC congresses, “which is that the ruling party is a mere contraption and an inchoate body of disparate elements. Such a party cannot organise for the genuine development of the country.”