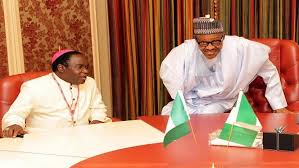 State of The Nation: Buhari’s wife in agreement with me- Kukah

The Catholic Bishop of the Diocese of Sokoto, Matthew Kukah, has said that President Muhammadu Buhari’s wife, Aisha, also agrees with what he said about the the incompetence of her l husband.

The outspoken cleric stated this during an interview on Arise TV on Tuesday.

According to him, but he has nothing personal against Buhari, but his policies which Aisha also disagrees with.

Kukah said, “All those saying I attacked the President, I have never attacked his person.

“All I have spoken about is his inability to manage diversities effectively and efficiently.

“Those who think these things are personal would see that I have never talked about his person or character; I believe he is a gentleman but as far as being the President is concerned, he has done a bad job, even his wife has also disagreed with his policies.

“So, those guys should not sit in their air-conditioned office drinking coffee and thinking everything is honky-donkey. Let them disagree with the text of my message.