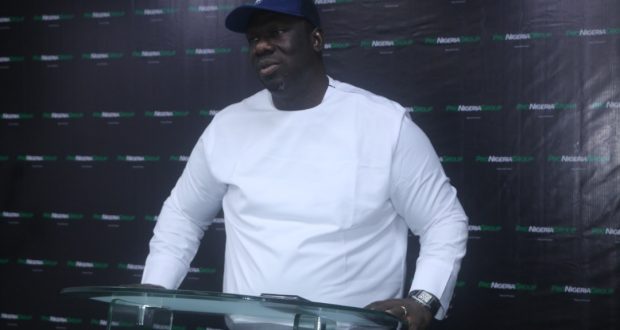 The Convener of the Pro-Nigeria Group PNG, Lai Omotola, has sent a message to Nigerians as the country celebrates its 61st independent anniversary.

Speaking during a press statement in the head office of PNG in Maryland, Lagos on Thursday, Omotola said that this is not the time for Nigerians to criticize the government, but the time to join forces together to pull the country out of the woods.

He said that the economy is in a dire situation, noting that if concerted efforts are not made by the people of Nigeria, it may be disastrous.

He said: “It is not the time for much celebration, but a time of sober reflection. What we face now as a nation requires all good men and women to come together to savage Nigeria.

” Our economy is at the verge of collapse. If the economy collapses, security will collapse, lives and properties will collapse..

“It is not an exaggeration, our economy has entered a panic mood, and if a concerted effort is not made, the next 12 months, which lead us into months of political campaigns, may be disastrous because the economy is built on fuel subsidies, where the Federal Government, as at today, is paying N113 for every liter of fuel. The government is subsidising electricity. The government is subsidising education.

Speaking further, the PNG Convener noted that the heavy borrowing being embarked upon by the present government does not augur well for Nigeria considering the fact that the  country is using 90 per cent of revenue to service debt.

“Government is doing all these through heavy borrowing. The government is borrowing to pay salaries and finance infrastructure. At the end of the day, 90 per cent of our revenue is used to service debt. ‘Never before has our economy been in such a bad shape.’

“Our wealthy people have seen the future, so they are converting Naira into billions of dollars, and this is weakening the Naira against the dollar. At the moment, the Naira is worth N570. By December, it may rise to N700 as a result of speculative buying. This matter, no doubt, is beyond the Central Bank of Nigeria (CBN).

He added: “Therefore, Nigerians should do away with criticisms of the government. We should all join forces together on how to savage the economy in the post-Buhari era.

” Nigerians should do away with politicians whose intention of getting to the corridor of power is to exhibit business as usual, but they should be looking for the right people that will bring the economy out of the woods. If the economy is in good shape, other sectors of the country will also be in good condition.

” Once more, I want to appeal to Nigeria to stop using all their time and energy in criticizing the government, but to invest all our energy on how to join hands together in building this country

“We should come together with the same goal of preventing Nigeria from collapsing because there is no place in the world that can contain Nigerians.Good people should be making an effort to figure out how to pull the country out of an impenetrable danger.

Previous: Ohanaeze Ndigbo to PDP: We won’t allow your offices to stand in the South East if you deny us presidential ticket
Next: NNPP calls for impeachment of gov Abiodun, Deputy over foreign trips