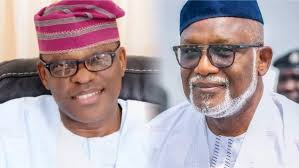 Supreme Court Judgement in Akeredolu Vs Jegede: Perspectives from a Non-Lawyer- By Lai Omotola

It is nearly impossible for lawyers to agree on most legal matters, and like economists, you get different legal opinions on the same subject matter.

Over the 2 decades that I have been a chief executive, I continue to have the privilege of sitting and listening to lawyers’ views on our own company’s legal matters, and after listening, it always leaves me to decide on the direction to take. The buck stops on the clients’ table and this explains the reason why lawyers will always start each letter with “we have our client’s instruction to write”

In the case of Akeredolu vs Eyitayo, I have taken time to listen to the legal advice of Mr. Festus Keyamo and that of the Attorney General of the Federation/Mr. Akintola, the legal counsel on record.

Mr. Festus Keyamo, SAN, warns that by the judgment of the supreme court, there is a need to dissolve the convention committee led by Mai Buni, the Executive Governor of Yobe State, because there appears to be a lacuna in the supreme court judgment which shows that if Mr. Buni had been joined in the matter, the PDP would have won the election. Therefore, there is a need to halt the proposed congress and dissolve the committee led by Mr.

According to Mr. Festus Keyamo, this lacuna will weaponize the opposition to seek the cancellation of all elections conducted under the leadership of Mr. Mai Buni.

On the side of the Attorney General of the Federation, he had a dissenting opinion that a mere committee can not. be seen to be in breach of section 183 of the constitution and article 17 of the party that says no executive governor of a state should hold an executive position or collect a salary. He argued that the present committee is adhoc with no tenure, not elected, nor do they collect salary

He further said to accept Mr. Festus Keyamo’s position is to say all governors that are members of the Governors forum are in breach of the constitution.

On the part of Mr. Akintola, speaking on Channels TV, he said all issues had been resolved from the tribunal to the supreme court and it was impossible for a minority judgment to become a judgment of the court. A similar case is that of Chief Obafemi Awolowo in 1979. He maintained that if Mr. Mai Buni was in breach, then all the Governors on the National Executive Committee of APC were in breach. He argued that there was no way Mr. Mai Buni could be joined in the suit because of the electoral Act, because since APC is a party in the matter, you could not join Mr. Mai Buni. He said even though PDP raises internal issues within their own party, APC does not provide a locus standi for PDP.

In all the legal opinions raised by the legal luminaries, just one aspect is of importance to me in resolving the issue, and that is the word “executive”. Section 183 of the constitution states: “THE GOVERNOR SHALL NOT, DURING THE PERIOD WHEN HE HOLDS OFFICE, HOLD ANY OTHER EXECUTIVE OFFICE OR PAID EMPLOYMENT IN ANY CAPACITY WHATSOEVER.

Firstly, there is a need for a clear interpretation of the word “executive”. I have not been able to see the interpretation of the word executive in the constitution or in the interpretation act. Therefore, using the 4 rules of interpretation, I will like to use the golden rule. The word executive is from the medieval Latin word “exesqui”, which means “carry out”. That is, to carry out a plan or action. Executive is also an adjective that describes having the power to make decisions (reference is google) Please underline Power. The problem with the position of the AGF is that he has not been able to distinguish between title and function. Mr. Mai Buni may not have the title of executive chairman but may be functioning in an executive position, which is the case for now. The AGF said it was an adhoc ommittee. If so, an adhoc committee only has one mandate, and in this case, it is to organize a convention. Nothing more and nothing less. When the committee begins to delver into other functions, then it becomes questionable.

When this adhoc committee was formed, it was supposed to be short-lived, but it has taken more time than necessary, such that other unforeseen issues have come up. The argument that Mr. Festus Keyamo was part of the lawyers recommended does not hold because none of them were able to see the obstacle ahead. I would like to ask if there is any function that the past Chairman did that Mr. Mai Buni could not do?

Secondly, the AGF argued about the spirit and the intent of the writers of the constitution by comparing the Governors Forum to Mr. Buni’s committee. The Governors Forum has no executive power and can not exercise any power on any governor, which is a different case from Mr. Buni’s committee from the results of the just concluded congress election, which resulted in two parallel congresses. Is it not true that whichever congress Mr. Mai Buni accepts becomes the authentic congress? Is this not power? In the spirit of the constitution, the writers of the constitution believe that the governors should have 100 percent concentration on state governance. Therefore, by activity, can it not be said that the position of Mr. Buni as present is higher than his position as a governor and also makes him busier with state affairs when he has to attend to 36 states as opposed to 1 state. Clearly, the writers of the constitution created section 183 for this purpose.

Thirdly, no two cases are the same. If Mr. Akintola SAN says PDP lacks locus standi to go to court over section 183, what about aggrieved party members of APC? The Supreme court judgment is the final concerning other arguments and prayers around section 183.

Also, on the claim that the name of Mr. Buni can not be added to the suit because of the electoral act, I will disagree because section 183 is a constitution matter which is above the electoral act, so your position remains speculative until tested.

Some lawyers have said Mr. Buni can not be joined because he enjoys immunity that will only suffice for criminal matters and not civil.

The meaning of Mr. Festus Keyamo’s weaponize “is from the state court to the federal high court to the appeal court to the supreme court across the 36 states, including Abuja, all these Justices will have to give judgment on similar cases along section 183 and I bet, this country has never seen anything like this.

Finally, it is my considered view that Mr. Festus Keyamo SAN’s legal opinion should be adhered to without any political undertone in order to save the party.

Lai Omotola is a public affairs analyst and the publisher of politico.ng