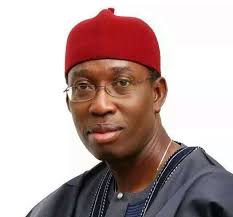 The Supreme Court on Wednesday affirmed the election of Gov. Ifeanyi Okowa of the PDP as Governor of Delta.

Delivering the judgment, Justice Centus Nweze held that the apex court had no reason to upturn the concurrent decisions of the lower court.

“The appeal had been right described at the Court of Appeal as a metaphor of forensic Golgotha’’.

“In the circumstance, the appeal is bereft of any iota convincing evidence and it is hereby dismissed. Ifeanyi Okowa is therefore affirmed as governor of Delta State’’, Nweze said.

Chief Great Ogboru who contested the March Governorship election on the platform of the All Progressives Congress (APC) had approached the apex court after his dissatisfaction with the decisions of the lower court.

NAN recalls that the Court of Appeal had in a unanimous decision by a panel of five justices affirmed the Okowa’s victory at the poll.

Ogboru had claimed the election was marred by over voting and violent disruption, adding that the governor took advantage of the situation to amass unjustifiable votes.

The APC candidate who appealed on 37 grounds also claimed that the tribunal erred on the point of law in most of the issues that guided its decision.

Okowo had urged the courts below to discountenance the allegation canvassed by Ogboru, adding that INEC conducted a free and fair election in the state.

He also averred that the appellant’s allegations were baseless and built on hearsay and could not be proved.

The apex court affirmed the election of Abubakar Bello of APC as Niger governor.