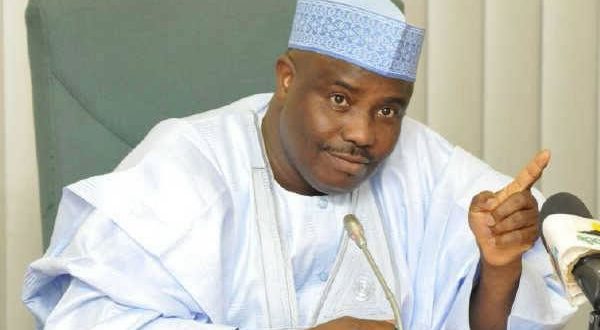 Sokoto State Governor, Hon. Aminu Tambuwal, says  devolution of power may be the panacea to the challenges facing Nigeria.

He described the difficulties facing the country as not insurmountable, adding that they can be addressed within the framework of “one Nigeria.”

The governor spoke yesterday in Abuja at the commencement national campaign for the registration of 20 million Nigerians under ‘Project 20 Million.’

Tambuwal, represented by his Special Adviser on Small and Medium Scale Enterprises, Hon. Akibu Dalhatu, said the country’s founding fathers were conscious of the complex nature of the country and tried to build an inclusive and egalitarian society where people would have a sense of belonging and enjoy freedom.

According to him, in the First Republic, the different regions developed at their pace and made remarkable achievements.

But he lamented that the inability to manage political differences cut short the democratic journey and led to a civil war.

The governor said the military intervention in politics reversed the gains of the democratic journey, leading to decades of authoritarianism as well as regression in freedom and good governance.

He added that with the advent of the civil democratic dispensation in 1999, good governance returned to centre-stage.

“But how well have we fared? I would say with all sense of responsibility that it has been a mixed bag. The nation is yet to develop a framework for effective engagement of the citizenry in governance.

“This must never be done on an ad hoc basis. In the development of government policies, we must factor in citizen participation. Their input gives legitimacy to whatever we are doing,” he said.

Tambuwal said when he was the speaker, the House of Representatives organised town hall meetings in all the federal constituencies to collate the inputs of Nigerians to the constitution amendment process, adding that was the first time the process was truly participatory and transparent.

He said the people embraced the process with enthusiasm because they felt that their voices were beginning to count in the affairs of government.

“Unfortunately, some of the forces are pro-disintegration. They hide under the guise of certain agitations to set our people against each other in order to achieve a pre-determined devious goal. We must be vigilant.”

He said Nigeria is a potentially great country, adding that its difficulties and challenges are not insurmountable. “We can address them within the framework of one Nigeria. Other countries envy us. Why should we destroy our country simply because we want to create fiefdoms for ourselves? “

Tambuwal explained that a constitution amendment that critically addresses the issue of devolution of power may be the panacea to the challenges the nation faces.

“But if we effectively follow our current constitution, which contains the major characteristics of good governance, the tension that has enveloped our country will subside and we shall place our dear nation firmly on the path to sustainable development,” he said.

He pointed out that the nation needs to address the issues of poverty and youth unemployment to achieve peace.

“The welfare and security of the people must be our major priority. The government of President Muhammadu Buhari has rolled out many programmes aimed at lifting millions of Nigeria out of poverty. This is quite commendable and the intention must, however, be matched with sustained action,” he said.

Tambuwal explained that the rule of law and due process are a major characteristic of good governance, saying that all persons, institutions and entities are accountable to laws that are publicly promulgated.

He said it was sad to note that the government has been following the rule of law and due process in the breach, regretting that court orders are being disobeyed with impunity, institutions of democracy are attacked, while steady erosion of fundamental freedoms is condoned.

He also expressed worry at the sustained cries of exclusion in the governance of the country by some sections of the country, which he said has been going on for many years without any conscious or deliberate effort to assuage their feelings.

The governor said when people feel excluded and those who are supposed to address their concerns continue to treat them with contempt, certain forces alien to democracy and national unity may rise up in those areas and take control.

According to him, moderate voices will be driven underground, a situation he described as a dangerous development for the country.

He said: “We must join forces to prevail on those in charge of federal authority to change their approach. They must engage sections of the country who feel excluded from governance. The country belongs to all of us. When elections are over, you must unify all Nigerians and proceed to deliver dividends of democracy.”

Previous: Lagos Assembly will not failed in its responsibility- Obasa
Next: Igbo leaders engage in critical political meeting