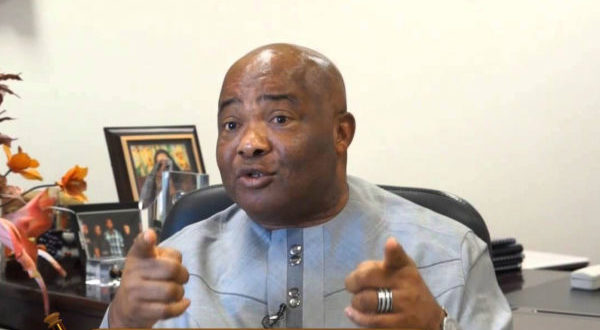 The era of marginalisation is over in Imo- Gov Uzodinma

Imo State Governor Hope Uzodinma has assured the people of Ohaji/Egbema and Oguta Local Government Areas that marginalisation is now a thing of the past in the state.

He dropped this hint when he received stakeholders from the area at the Government House, Owerri, the state capital.

Uzodinma expressed displeasure over the deplorable state of communities in the area, despite the huge amount of money that goes to the Imo State Oil Producing and Development Commission (ISOPADEC) monthly from the 13 percent derivation fund.

He warned that the era when few people sat in their homes and shared the money meant for development was over.

Uzodinma disclosed that his administration will set up a monitoring and evaluation committee to ensure that projects are executed in line with contract specifications. He said the new board of ISOPADEC, which will soon be constituted, shall be made up of people of integrity and proven track record, who will help drive the desired change and foster prosperity in the area.

On restiveness among the youths, Uzodinma lamented that, despite the huge human capacity in the area, some people only identify youths of Ohaji/Egbema and Oguta with thuggery and violence.

The governor urged them to get it right now that a brother and friend is the governor. “We must agree that we want the best for ourselves, we must begin to have change of attitude, thuggery and militancy must be resisted, and the time to harness our potential is now,” he added.

The governor said Adapalm, which used to be the pride of the state, will be reactivated and its lost glory restored with the appointment of Brig. Gen. Kalu Austin Egwuagu (rtd.) as the Board Chairman.

The leader of the delegation and former Speaker Imo State House of Assembly, Chief Goodluck Opiah, recounted the untold hardship and marginalisation suffered by the people. He expressed confidence that the governme

Previous: PDP plans to stage protest at embassies of EU, AU in Abuja
Next: 2023: PDP, APC will fizzle out, power will remain in the north, popular prophet predicts