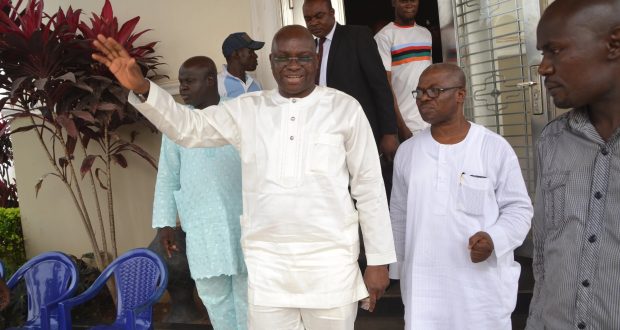 There is more to car gifts to Adebayo, Oni, to the exclusion of Fayemi – Oni’s Aide

Olusegun Oni’s political campaign organisation says his rejection of a car gift from Ekiti Governor, Ayo Fayose, was done in the interest of all Ekiti workers and pensioners.

The Director General of Segun Oni Campaign Organisation (SOCO), Ife Arowosoge, said on Tuesday in Ado-Ekiti that the gift by Fayose was not only inappropriate but morally wrong.

“It is not appropriate for the governor (Fayose) to give out a jeep of about N52 million at this time the state and local government workers, as well as pensioners, were being owed for several months.

“Like other former governors in Nigeria, governors Adebayo, Oni and Fayemi are more or less pensioners, who are entitled to both gratuity and other benefits, according to the laws of the state.

“Governors are entitled not only to car but cars, replaceable every four years. They are also entitled to decent accommodation built for them at the federal and state capitals.

“That being the case, any such presentation to former Governor Adebayo and the one being proposed for former Governor Oni, when it is done, can’t be regarded as gift from Governor Fayose.

“However, to the best of my knowledge and to place on record, no car has been presented to and received by Olusegun Oni yet,’’ Arowosoge said.

He however said the same could not be said of cars given to some teachers in the state on Teachers’ Day, which he said were gifts and not entitlements.

“Some commentators have even called the cars given by Governor Fayose as `Governor’s Greek gift’.

“It is now clear that the purported cars are part of the entitlements of the former governors and can therefore not be regarded as gifts from Governor Fayose.

“But it is important to ask why he is making the cars available to only two of the three former governors and not the three.

“And why is the timing now when elections are around the corner and after spending about three and a half years in office?’’ the campaign team official said.