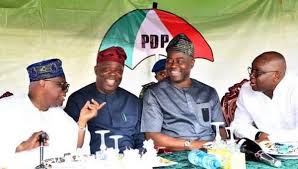 Governor Seyi Makinde of Oyo State has said that ceaseless efforts are going on to ensure unity in the Southwest Peoples’ Democratic Party (PDP) .

Speaking after holding a meeting with some party key leaders, he said that reconciliatory efforts of the former Governor Olagunsoye Oyinlola-led Reconciliation Committee will have results.

He enjoined some members fuelling the crisis rocking the southwest zone to repent and desist from such act.

Makinde made this remark in a statement by his  Chief Press Secretary Taiwo Adisa.

Makinde stated that the  alleged suspension of the zonal chairman, Dayo Ogungbenro, is null and void, adding that members who suspended him lack the power.

He said: “leadership of PDP in the Southwest came to see me to discuss the situation with the PDP in the Southwest zone and you can see the chairman and then out of the 12 members, five of them came in from Lagos, Oyo, Osun and Ekiti. We didn’t see anyone from Ondo and Ogun.”