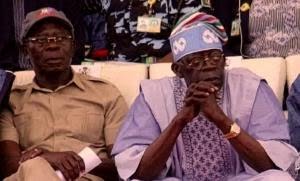 Those plotting to remove Oshiomhole are ingrates- Tinubu

All Progressives Congress (APC) National leader, Sen. Bola Tinubu on Sunday kicked against moves by some party leaders to remove the National Chairman of the party, Adams Oshiomhole, from office.

According to him, the chairman was human, therefore had merits as well as flaws, noting that his humanity should not be grounds for his dismissal.

“The Chairman has been a tireless campaigner and mobiliser for the party; he has steered the party through difficult elections and his contributions should not be undervalued now that the bulk of elections are behind us.

“To do so would be an act of ingratitude, It is no secret that Oshiomhole and Edo Governor Obaseki are in dispute which is unfortunate.

According to him, the party has moved through proper procedures within its organs to hopefully resolve this spat.

“All party members know that such decisions are part and parcel of internal party governance, yet they shunned the agreed party reconciliation mechanism and resorted to other means to oust him,” Tinubu said.

He said that the self-help attempts were unwarranted, noting that the attempts revealed more about the perpetrators than they do about the chairman.

Tinubu noted that the plotters launched their attack solely because they perceived the chairman as an obstacle to their 2023 ambitions.

He said that they went to court knowing full well that the party constitution prohibits such action, noting that they had not exhausted all internal disciplinary procedures.

“Those engaged in these manoeuvres see themselves as clever or cunning; they do so because they only understand the mean craft of political intrigue.

” They have yet to understand the value and long-term utility of democratic governance and that is why they embark on the strangest of quest.

“They would rather dismantle and weaken the institutional core of their party just to gain control of that weakened edifice in order to pilfer the party nomination, which they crave, “he said.

Tinubu said that himself and many others had expended sweat, tears, toil and sleepless nights to build the party and their personal sacrifices were not insignificant.

He noted that the party was not simply built as a vehicle for personal ambition, but built to bring progressive governance to the nation.

“To be an APC member means more than merely carrying a membership card, It means to believe in a set of ideals and principles geared to our highest purpose as a party and a nation.

“In a broader context, those afflicted with the 2023 virus do a grave disservice to President Buhari and his administration.

“They should be trying their best to help the president, instead of seeing him as the present leader and commander-in-chief who would soon exit the post.

“How can they be committed to helping him realise his mandate when the fullness of their gaze is affixed to seizing this very mandate for themselves,” he said.

Tinubu said that the president was faced with many challenges and fighting hard on security to keep the population safe.

He noted that Buhari was also pushing for economic reforms that will augur future sustainable growth.

Tinubu added that the president’s disdain for corruption remained unwavering and his efforts to contain the corona crisis could be seen.

“We must rally around Buhari instead of everyone saying they are working for the party and nation but going their separate ways based on their selfish designs.

“We must help him build a stronger national consensus on policies that will ensure safety and bring greater prosperity; If need be we must offer ideas and suggestions that move policy and progress forward.

“This is the time for governance, it is not the moment to bring the politics of 2023 into 2020 because in due course, 2023 shall come and nothing can prevent it, “he said.

Previous: “We will defeat you easily in 2023 without campaigning,” PDP tells APC
Next: “Stop going to court, allow my committee to do its work,” Akande warns APC members