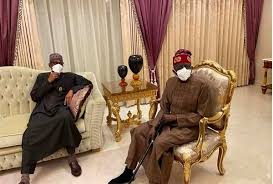 Popular activist, Reno Omokri has accused Bola Tinubu of campaigning for the presidency even from his sick bad in London.

The former aide to ex-President Goodluck Jonathan made the remark in a tweet.

The former presidential aide wondered why Nigeria gained independence from Britain following the actions of Buhari and Tinubu.

“With the reality of this fact, why did we gain independence from Britain only to shackle ourselves with London based despots who are worse than the British?”

Tinubu has been in London for over a month now due to ill-health.

While in London, the former Lagos State governor had played host to several top Nigerian politician including Buhari.

Meanwhile, there are claims that the APC National Leader might contest for the president of Nigeria in 2023.

Against this backdrop, his campaign posters have been sighted in some states including the Federal Capital Territory, FCT.

Despite insinuations, Tinubu is yet to officially make his intention public.

Previous: PDP reacts as some members pass vote of no confidence on gov Makinde
Next: Jonathan will give Tinubu a good fight if he joins APC- Rep member