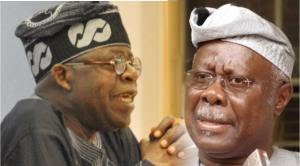 A Top chieftain of the People’s Democratic Party , Bode George has again attacked  Asiwaju Bola Ahmed Tinubu on national television for his dealings in Lagos State.

According to Chief George, Tinubu owns three private jets, one of which can contain about 900 people, he questioned why Tinubu would have that kind of jet.He also revealed that Seyi Tinubu is in charge of all the billboards etrected in Lagos State.

He further said that Folashade Tinubu-Ojo is not supposed to be the Iyaloja of Lagos( leader of market women) because she doesn’t have a kiosk in the market.

He added that Tinubu has taken Lagos State as his personal business empire.

Previous: 2023: It will be unfair if PDP refuses to zone presidential ticket to Southeast- Lawmaker
Next: U.S ELECTION 2020: PRESIDENT TRUMP WILL BE BLOWN AWAY – BY LAI OMOTOLA