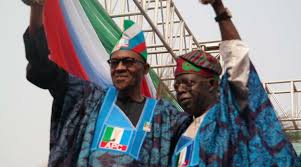 Tinubu promises to sustain Buhari’s legacies if elected as President

The presidential candidate of the All Progressive Congress APC Asiwaju Bola Tinubu has lauded President Muhammadu for providing level playing ground for all the aspirants during the party’s presidential primary.

Tinubu gave this commendation during a ‘Thank You’ visit to the president at the State House, Abuja.

He was accompanied by Lagos State Governor Babajide Sanwo-Olu and Mr. Wale Tinubu.

Speaking to reporters after the visit, he promised to sustain Buhari’s legacies when elected as his successor.

Tinubu said: “He promised the whole country and the world that he will build a legacy of transparency and consistency; legacy of a level playing ground for all the aspirants; that he will be committed to democratic principles and values and he did so.

“He didn’t endorse anybody, he didn’t impose anybody, he did not, at any time, attempt to tinker with the process of this election to favour one tribe or the other. He is steadfast, he is trust worthy, he is dependable, he’s a leader.

“If he had to give it to anybody yesterday, it’s not my victory that is important, it’s the process and the management of that election that gave it to President Muhammadu Buhari.”

Asked what his selling point would be during the campaign for the 2023 election, Tinubu said: I have the experience – from the private sector to public sector and ready to hit the ground running same day and not mess up the legacy of progress and honesty that is left behind for me and handed over to me by President Muhammadu Buhari.

He said: “All APC family members should celebrate in a limited manner, we just begin the hard work ahead to win the victory for our party is a hard one and we will win.”

He didn’t comment  on who his running mate would be, saying “I won’t tell you that. That is my right. It’s in my pocket book.”

Follow us
buhari legacies legacies when elected as his successor. Tinubu 2022-06-10
Ajibola

Previous: I know Tinubu’s track record, he will perform well- Buhari
Next: Ayade to Tinubu: You are a soldier of democracy who has seen it all