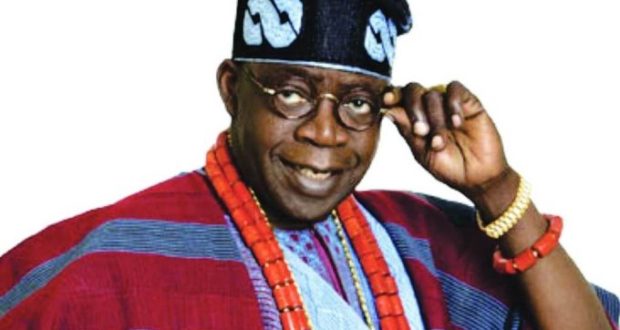 Tinubu@68: Investigating his politics and ideas

Politics is defined by many scholars as the struggle for the acquisition, control and utilization of state power. Experience has shown that majority of seekers of this state power, politicians and their comrades in arms within the public service, are faithful subscribers to the network of Machiavellian philosophy-the end justifying the means, no matter how reprehensible such means, THE NATION reports

For this, it is no wonder that a large number of citizens perceive politics as a dirty game, which decent people should be weary of getting involved in.

This is a mistaken notion of politics which, unfortunately tends to leave this all too critical sphere of public life to rudderless scavengers, self-seeking opportunists and mercantile political entrepreneurs, who pursue state power only to obscenely accumulate wealth, without concern about public good.

This is really the bane of politics in Nigeria. Our civil rule, aka ‘democracy’, rather than being a vehicle for national development, has remained an effective flying Jet for poverty and underdevelopment in, ironically, one of Africa’s most resource-endowed countries.

There are those politicians who are attracted to the intrigues, manipulations, subterfuges and betrayals that tend to characterize the pursuit of power.

Those in this category seek power just for its own sake and for the glamour, pleasure, fame, wealth and opportunity to exercise dominion over others.

These politicians expend considerable time, energy and resources in pursuing, achieving and retaining power without giving much thought to the higher purpose that power can be utilized for.

On the other hand, there is another class of politicians, and the late Chief ObafemiAwolowo is the best model I can think of in this regard. For this category, the overriding purpose of politics and power is to help elevate the society to incrementally higher levels of development.

That is why Awo defined politics as “the art of selfless service to humanity”. In launching his campaign for the presidency of Nigeria in 1979, Awo famously declared that the presidency of Nigeria was not an office of pleasure but one that would demand the greatest discipline, commitment, hard work, diligence and sacrifice from anyone privileged to be given the mandate by Nigerians.

As a result of this philosophical disposition to the acquisition and utilization of power, Awo saw politics

first and foremost as an intellectual enterprise; a vocation that demanded ceaseless and most rigorous pursuit of the best developmental ideas for the transformation of Nigeria.

Thus, his contributions to public discourse and the policies and programmes of the political parties that Awo belonged to, always showed evidence of someone who committed time and energy to deep thinking

about Nigeria’s problems and continually seeking workable and viable ideas for the country’s progress.

In the present political era and among his contemporaries, it appears to me that the National Leader of the All Progressives Congress (APC), Asiwaju Bola Ahmed Tinubu, best symbolizes this commitment to what I call Value Added politics and ideas.

One always gets the impression on listening to or reading his views that, for him, even more important than seeking power is the consistent and relentless search for transformational ideas and policies that power will be utilized to actualize.

Reading through Asiwaju Tinubu’s statement to mark his 68th birthday last Sunday, further strengthened my view of Asiwaju as a mind that thinks profoundly and rigorously about the country’s challenges and which comes up with suggestions and ideas to promote public good.

thinking, time -consuming and rigorous brainstorming with some of his associates. It is instructive to know that Asiwaju’s associates are in categories for different purposes and assignments.

These range from serious and rigorous intellectual matters like research and documentation, to less mentally involved acts like political dancing and mobilization. His birthday this year coincided, unfortunately, with the coronavirus pandemic currently ravaging humanity.

The popular Bola Ahmed Tinubu annual colloquium could not hold. But Tinubu’s rich public statement on the occasion remains a veritable intellectual feast with a cornucopia of suggested policies to help the country cope with the unprecedented challenge.

It is unlikely that the run of the mill politician whose overriding motivation is ego-driven pursuit of power, would invest so much mental resources in the generation and dissemination of transformational ideas, even with higher degrees of some of these Lilliputians .

Let me make it clear that to me, his Party APC, cannot be taken as an ideal political party in the true sense of the word and neither do I see him or any other person as a perfect being; nor do I write as an uncritical adulator of his political philosophy and ideas.

However, all those with whom I worked and related while I served in the government of amiable President GoodluckEbeleJonthan (GEJ) can testify that I was always telling those who would listen that the PDP had a lot to learn from Tinubu’s

approach to politics particularly party organization and commitment. It is instructive that my former boss, DrGoodluck Jonathan, in his birthday message to Asiwaju acknowledged that it is difficult to rival in this dispensation, Asiwaju’s contributions to Nigeria’s democratic development.

In His Excellency DrGoodluckEbeleJonathan’s words: “As a patriot, politician and leader, you have contributed so much to the advancement of our nation’s democracy and nurtured many individuals to greatness.

I wish you more years of sound health, peace and glory as you celebrate. Happy birthday, Your Excellency”.

The truth of the matter is that Asiwaju Tinubu’s political influence and appeal today transcend party, ideological and even ethno-regional boundaries.

Reading through his policy prescriptions on the coronavirus pandemic proposals, for instance, it is difficult not to admire the compassion that drives his welfare-oriented policies even though those of a divergent ideological disposition may not agree with what they perceive as the over-extended welfare state that he advocates.

Quite apart from the cost of the welfare state, which may be unsustainable in the long run, the bureaucracy it tends to spawn, some argue, tends to breed inefficiency and provide avenues for corrupt enrichment.

But then, given the depth of poverty and misery in our society and the corresponding sharp inequality, is there really any alternative now to overwhelmingly deploying society’s resources to investing in the most

potentials and transforming them into developmental assets rather than liabilities?. This requires massive investment in education, health, infrastructure, and poverty alleviation as Tinubu advocates in his statement.

Of course, the question arises as to where the resources to do this on the advocated scale will come from especially in the light of the drastic fall in oil revenues, that has already gravely distorted the 2020 budget, and the fact that the coronavirus crisis is hitting at a time when the economy is only being gradually weaned away from unhealthy dependence on oil.

The point certainly is not whether or not one agrees or disagrees with Tinubu’s policy proposals and their philosophical underpinnings.

Rather, it is for those who have alternative ideas, particularly in our ownPeoples Democratic Party (PDP), to come up with their own rigorously thought out policy alternatives in the pursuit of the common good.

It is noteworthy that in offering his ideas, Asiwaju himself said, “I proffer these measures not as somecomprehensive solution. I hope these ideas spark needed dialogue about the ways we may need toemploy to protect our nation from assault by the coronavirus”.

As we reflect on Asiwaju’s politics and ideas at 68, it is impossible not to refer to his immense contribution to the evolution not just of strong, viable political party organizations but also of a balanced party system that can enable democracy to thrive in Nigeria. If Tinubu had dumped the Alliance for

Democracy (AD) after the 2003 elections, for instance, when his party was obliterated by the PDP in its South-West stronghold and he became the only AD governor standing, it is unlikely that a viable opposition would ever have evolved up till now to check the one party dominance of the PDP.

I cannot but stress here that those who took the opposite road to destroy PDP and are now back to same PDP, as so called opposition leaders, cannot pretend not to know how bad they now reflect as selfish destroyers in the light of good example of Asiwaju’s consistency and anger management ,which are great virtues of nation builders.

I was a member of the Electoral Committee at the PDP Convention preceding the 2015 elections, where they started their journey out of PDP, in their immaculate white. I was also at the National Secretariat, in a meeting of Media Committee of another Convention, when former Governor Ahmed Markarfi, as the Chair of PDP then, welcomed them back, now in not so immaculate apparel.

These are masters in disloyalty, abrogation of internal party democracy and gross disrespect for the party’s constitutive and regulative rules. They were consumed by satanic hatred for GEJ who has continued to tower above them.

It is my view that truly committed party men and women, would have stayed to fight to enthrone justice within their party and pursue intra-party reforms in the long term.

The existence of viable political parties is too critical for the kind of vagrancy that sees politicians jumping cavalierly from one party to another and destabilizing their political parties, to be allowed to continue.

In his intervention in the plot that nearly resulted in the removal of the APC National Chairman, Comrade Adams Oshiomhole, shortly before his birthday, Asiwaju had stressed that the APC was formed not just for the pursuit of personal ambitions but “because we saw it as perhaps the only enduring hope to bring progressive governance to this nation”. That is the voice of a stable party man, not that of a blind driver on an express way.

If democracy is to be enduring as well as promote development in Nigeria, then politicians must be committed to their political parties and abide by stipulated party rules and procedures.

Intra-party democracy must be continually deepened and political parties must nurture a set of core values to which their members owe enduring fidelity no matter how much they may be aggrieved with occurrences within the party.

True, it is my view that there is hardly any concrete ideological distinction between the APC and the PDP as of now. Nigeria’s poverty is too deep and her underdevelopment so entrenched that either of the two parties that comes to power will hardly have any choice but to pursue the same set of policy options with perhaps superficial differences in terms of implementation.

However, since power corrupts and absolute power corrupts absolutely, a ruling party that knows it can never be dislodged from power because it will always win elections will inevitably become complacent, vulnerable to corruption, insensitive to public opinion and ultimately an obstacle to progress and development.

That is what happened to the PDP and the APC must be under no illusion that the same fate cannot befall it if it refuses to learn from history.

If we are not to be saddled with a dysfunctional and development-stultifying one party-dominant system, we must nurture and support the existence of viable, well organized and efficiently run as well as transparently managed political parties that can compete effectively in elections and enable periodic change of power among parties that can check abuse of power and complacency as well as promote development.

That is why I have nothing but the greatest admiration for those PDP leaders who have remained steadfast in the opposition party since 2015 and are committed to rebuilding the party and restoring its vibrancy and vitality, I have no regard at all for blindly ambitious manipulators now gallivant about as leaders of opposition in the house they bulldozed. I admire and publicly salute the exemplary commitment and principled consistency of

AsiwajuTinubu, an outstanding politician and leader who deserves all the accolades he has received on his 68th birthday. Like our GEJ, I wish him well as we will soon be on the march again. The struggle for enduring democracy certainly continues.