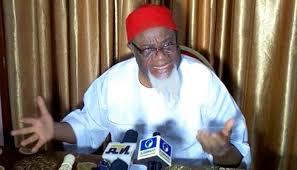 Tinubu’s health very poor, only insane people will vote for him- Ezeife

The former Governor of old Anambra State has said that the All Progressives Congress presidential candidate, Bola Tinubu, is not for to govern Nigeria because of his poor health.

Ezeife who is also the Chairman  the Igbo Elders Consultative Forum, has added that only those who are insane or ignorant about the situation would vote for Tinubu

He made this remark n a statement issued on Tuesday night from the United States about the upcoming general elections.

Speaking on the ambition of Tinubu, Ezeife disagreed with Tinubu’s aide in a statement saying that Tinubu old for the office of President of Nigeria, adding that the same faith ticket would spell doom for the ruling party.

He said: “Jagaban Tinubu, is really not well. Only people who are not well informed, or have lost sanity, will vote for him to go and die in AsoRock.

“The greatest problem of the old is brain power deficiency, especially loses of memory. I explained this to Yoruba youths who proposed my joining the race for President of Nigeria. Should everything have been alright for the Tinubu ticket, it’s Muslim- Muslim nature knocks it out – removes it from consideration.

“I appeal to Nigerians of every ethnic group and religious faith to bow to the will of the Almighty God, who seems to have taken over from our conscienceless politicians, to bring about a new Nigeria, to rescue Nigeria and revive her destiny – the country to which He poured an abundance of His blessings, making her the very most gifted Country on earth.

“Yes, Ecclesiastes says there is a time and a season for everything under the sun. This appears to be the time and the season for the manifestation of the new Nigeria which must develop to a world superpower, raising the respect and dignity of all blacks on earth and participating in, and improving the leadership of the world. God’s design and will dominate man’s will in, and mess up, of Nigeria.”

Reacting to the statement, the the Spokesperson of Tinubu Campaign Organization, Adebayo Onanuga, was dancing to the tune of Peter Obi,

He said that the former Governor iof Lagos State is physically fit and qualified to rule Nigeria very well.

Previous: 2023: MC Oluomo denies imposing Tinubu’s stickers on commercial buses
Next: Why Peter Obi has not released his manifestos to the public- Utomi