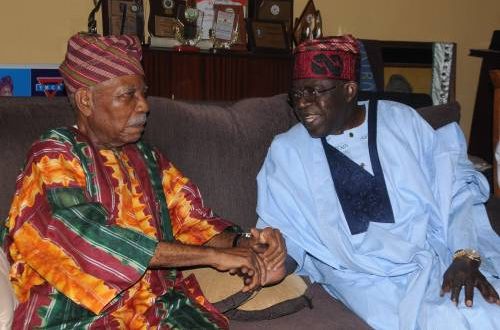 The pan-Yoruba socio-cultural organisation, Afenifere, said the visit of one of the National Leaders of the All Progressives Congress (APC), Bola Tinubu to the leadership of the group last week was a private one which had nothing to do with politics.

The group also said it was not aware of any plan by the former Lagos State governor to contest the 2019 Presidential election.

Tinubu had, on Wednesday last week, visited the group at the residence of its leader, Reuben Fasoranti, in Akure, the Ondo state capital, after which he spoke with journalists.

There were reports that Tinubu’s visit might not be unconnected with the political aspiration the APC leader ahead of the 2019 general elections but the Afenifere has since denied this.

The Secretary General of the group, Sehinde Arogbofa, said the visit of Tinubu was private and that he did not discuss any political issue with the leaders of the pan-Yoruba group.

Arogbofa also noted that the group was not aware whether Tinubu had any Presidential ambition in 2019 or not. He insisted that the closed-door meeting had nothing to do with politics.

“In the past 15 years, he has not been very close to us and if for this time, he felt it, as a real Yoruba man, to pay homage to the leader of Afenifere, I think it is commendable. So his visit has nothing to do with politics. It was purely private and nothing more,” he said.