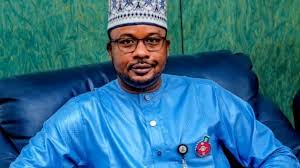 Announcing the decision in a statement he posted on his social media handles on Monday morning, the is yet to make a decision on his political career as he is still consulting.

He lamented that he was punished and betrayed for speaking against the failure of government and the APC.

According to him, APC of betrayef the trust of Nigerians, noting that members of the party do not see themselves as failures despite the hardship and economic woes of the country.

He added he  he bashed the Peoples Democratic Party (PDP) for its failures, noting that it will be hypocritical of him to keep quiet when the APC government and party have under performed.

He showed appreciations to the Kano State governor for giving him the opportunity to serve as his Special Adviser on Media and Publicity.

His statement read; “I have therefore reached a point in my life where I have decided to embark on a new political journey to ensure that I stick to my beliefs and principles. It is in this light that, after due consultation with my political mentors, constituents, friends and family, I resolved to exit the APC. My membership of the party cease from today, 21st March, 2022.”

“I have been a bonafide member of the All Progressive Congress (APC) party of Nigeria right from its inception almost a decade ago, precisely in February 2013.”

“I travelled to different parts of the country to campaign for the party at the local, state and federal levels. I stuck out my neck, risked my life, gave my word and trust, and extended my belief in a party that we all thought in 2015 will usher in the leadership that will answer the cry of millions of Nigerians for good government, social stability, and material prosperity.”

“By 2019 we reelected the APC again to manage the affairs of the country with the hope that its first term of four years was not enough to clear the mess it inherited from the defeated PDP administration.

“Regretfully, the trust and confidence we reposed in the APC (the government as well as the party) on two occasions (first and second terms) was betrayed. If anything, things became worse in the second term. The benefit of the doubt we gave the party in the first term vanished as we moved deeper into the second term.

“Failure’, our people say, ‘is an orphan’, especially when everyone recognises it as such. No one in his right mind want to be associated with it. But in the case of the ruling APC, those in power do not see themselves as having failed Nigerians. On the contrary, they perceive themselves as performing excellently. They douse themselves in self praise, self congratulations, and self centered behavior in public office. Many people in this country will rightly see their conduct as delusional. But the privileged ones in office today hardly notice the reality surrounding the lives of ordinary citizens: No food, no portable water, no stable power supply, no jobs for the youth, no regular salary for public servants, no pensions and gratuity paid; no respect for government agreement with university teachers; no control over inflation, no security of life and property, and no defeat of the stubborn insurgency in the north-east, with petroleum theft in the south-south becoming an existential threat to the entire nation.

“Accountability demands that we give account of our stewardship in government. I was privileged to serve my state, first, as Director-General, Directorate of Media and Communications at the Government House; and then as Special Adviser to the Governor on Media matters. In both capacities I served to the best of my ability. During this period I improved the image of the state government, and effectively networked with citizens groups to project a positive image of our state on the national scene at a time when irredentist mentality, gripping certain parts of the south, was portraying a negative image of the north generally.

“My job was to deal with mindsets, not concrete things. So the results of our work is not usually immediate. Despite this, we can see evidence of what we did in the quality of the relationship between the state government and the people, then and now.

“Note that what I did in office came in the wake of what I encountered during our struggle to electorally unseat the all powerful PDP administration in the state and the country at large from power in 2015.

“I survived arrows and bullets shot at me by evil forces in both the real and virtual worlds. I am equally mindful of the campaign promises we made to the people as a party. I am fully aware of the fact that the APC leadership nationwide have fallen short of those promises.

THE TRUTH WILL PREVAIL!

“But as I solemnly committed myself in December 2000 when I made my first entry into partisan politics over 2 decades ago, I will not just speak truth to power, I will try and live the truth that I speak no matter the cost.

“It was in that spirit that I vehemently criticised the PDP led government prior to 2015. It will be hypocritical of me today to keep quiet when our own APC government and party have under performed.

“I made several attempts to highlight some of these failures from the inside, but unfortunately amends were not made, and those in power were averse to my corrective steps. Consequently, l was suspendead from office in October 2020, arrested and sacked from my position in the Kano State Government in February 2021.

EXIT FROM THE APC!

“I have therefore reached a point in my life where I have decided to embark on a new political journey to ensure that I stick to my beliefs and principles. It is in this light that, after due consultation with my political mentors, constituents, friends and family, I resolved to exit the APC. My membership of the party cease from today, 21st March, 2022.

“In the interim, I will take a few weeks to further consult, reflect and digest the political terrain, before deciding on my next line of action.”

Previous: 2023 Presidency: Why Atiku is an enemy of Nigeria- Shina Peller
Next: APC Convention: South West nominates Omisore, Kekemeke for position of Secretary