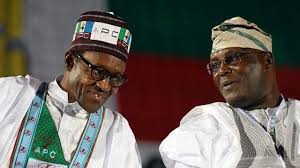 Train Attack: APC-led government must be committed to safety of Nigerians- Atiku

Ex-Vice President Atiku Abubakar has said that APC-led government of President Muhammadu Buhari must be committed to the protection of Nigerians.

He was reacting to the attack on a Kaduna-Abuja train by gunmen believed to be bandits.

According to him, the attack that left some passengers injured and others kidnapped is condemnable.

In a series of tweets, Atiku wrote: “The attack on Abuja to Kaduna-bound train that reportedly left many injured and some kidnapped is condemnable.

“The government’s commitment to the protection of the life and property of the people must remain sacrosanct.

“My thoughts and prayers are with all who are affected. As One People, there is no enemy, foreign or domestic, that we cannot defeat.”

It will be recalled that bandits had bombed a rail line between Katari and Rijani train station, along the Kaduna-Abuja route on Monday night.

During the operation, the attackers also shot at passengers, leaving some dead.