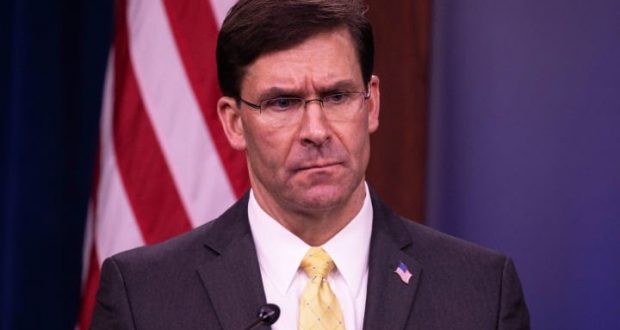 The sack is an unprecedented move by a president struggling to accept election defeat and angry at a Pentagon leader he believes wasn’t loyal enough, AP reports.

The decision, which could unsettle international allies and Pentagon leadership, injects another element of uncertainty to a rocky transition period as Joe Biden prepares to assume the presidency.

Presidents who win reelection often replace Cabinet members, including the secretary of defense, but losing presidents have kept their Pentagon chiefs in place until Inauguration Day to preserve stability in the name of national security.

“Chris will do a GREAT job!” Trump tweeted. “Mark Esper has been terminated. I would like to thank him for his service.”

Trump’s abrupt move to dump Esper triggers questions about what the president may try to do in the next few months before he leaves office, including adjustments in the presence of troops overseas or other national security changes.

Biden has not said who he would appoint as defense chief, but is widely rumored to be considering naming the first woman to the post — Michele Flournoy. Flournoy has served multiple times in the Pentagon, starting in the 1990s and most recently as the undersecretary of defense for policy from 2009 to 2012. She is well known on Capitol Hill as a moderate Democrat and is regarded among U.S. allies and partners as a steady hand who favors strong U.S. military cooperation abroad.

Miller has most recently served as the director of the National Counterterrorism Center and before that was a deputy assistant Defense Secretary and top adviser to Trump on counterterrorism issues. He has a long background with the military, having served as an enlisted infantryman in the Army Reserves and after that as a special forces officer. He also served in the wars in Afghanistan and Iraq. After his retirement from the military, Miller worked as a defense contractor.

Esper’s strained relationship with Trump came close to collapse last summer during civil unrest that triggered a debate within the administration over the proper role of the military in combating domestic unrest. Esper’s opposition to using active duty troops to help quell protests in Washington, D.C., infuriated Trump, and led to wide speculation that the defense chief was prepared to quit if faced with such an issue again.

During his roughly 16-month tenure, Esper generally supported Trump’s policies but more recently he was widely expected to quit or be ousted if Trump won reelection.