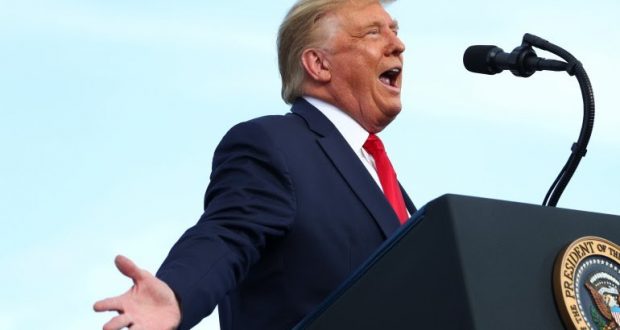 U.S. President Donald Trump on Thursday night again questioned the integrity of Tuesday’s presidential election and doubled down on his allegation of fraud against Democrats.

In an address to the nation, Trump said he was hearing “horror stories” about how Democrats were manipulating the exercise, especially mail-in ballots.

“I have been talking about this for many months. I have said very strongly that mail-in ballots are going to end up being a disaster.

“Small elections were a disaster, this is a large-scale version and it’s getting worse every day. We are hearing stories that are horror stories, absolute horror stories.

“We can’t let that happen to the United States of America. It’s not a question of who wins, Republican or Democrat; Joe or myself.

“We can’t let that happen to our country. We can’t be disgraced by having something like this happen,” he said.

But the race was still too close to call with counting yet to be concluded in key swing states including Pennsylvania, Georgia, North Carolina, and Alaska.

The president said he would file a lot of litigation that would probably end up at the Supreme Court, adding that he had a feeling “judges are going to rule”.

“I challenge Joe and every Democrat to clarify that they only won legal votes because they talk about votes, and I think they should use the word, ‘legal’.