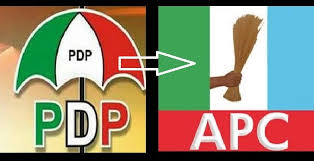 Two lawmakers in the Anambra State House of Assembly have dumped the Peoples Democratic Party (PDP) for the All Progressives Congress (APC).

It should be noted that Offor was also the Minority Leader of the House.

He disclosed that he consulted widely with his family and mentor on his decision to move from the PDP to the APC.

He said, “It’s time I join the party at the centre so that my constituents can feel and experience the presence of the ruling party.”

He also said that he defected to the APC after several consultations.

Mr Uche Okafor, the Speaker of the House, while rejoicing with the lawmakers, wished them well in their new party.

With this developmentt, the APC now has six members, leaving the PDP with four members, while APGA has 20 members in the Assembly.

Also at the plenary, the lawmakers commenced the scrutiny and third reading of the Open Grazing of Cattle and other Livestock Prohibition and Ranches Establishment Bill 2021.

Previous: Sen Kalu urges Buhari to pacify, dialogue with South East
Next: Politicians heating up polity, they should focus on insecurity, not election- Analyst