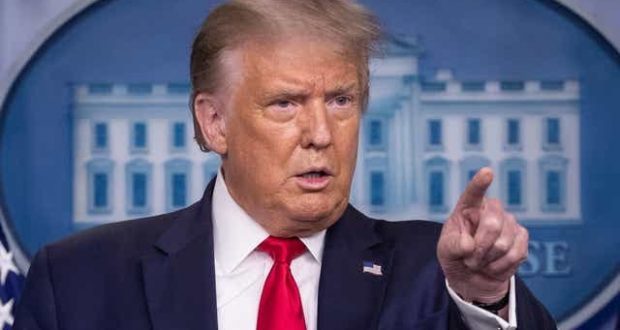 A federal appeals court on Friday rejected an attempt by President Donald Trump’s reelection campaign to keep alive its effort to undo the result of Pennsylvania’so presidential election, CBNC reports.

The blistering opinion from a panel of judges on the U.S. Court of Appeals for the Third Circuit, all three of whom were nominated by Republican presidents, said that the Trump campaign’s “claims have no merit.”

The appellate court’s decision affirmed a federal judge’s ruling from a week earlier that denied the Trump campaign’s request to block the Keystone State from certifying that President-elect Joe Biden won its election.

The opinion marks the latest court loss for Trump, who has refused to concede the election to Biden and is falsely asserting that he won the race. On Wednesday, Trump flatly stated, “We have to turn the election over.”

Trump’s personal attorney Rudy Giuliani had argued on behalf of the Trump campaign in the case before U.S. District Court Judge Matthew Brann in Williamsport, Pennsylvania. Giuliani has led the Trump campaign’s charge in the court of public opinion, spreading unproven claims of widespread voter fraud that he asserts tipped the outcome of the election.

But the appeals court noted in its 21-page opinion that when standing before Brann in a courtroom, Giuliani said that the campaign “doesn’t plead fraud” in the case.

“Calling an election unfair does not make it so,” the 3rd Circuit’s opinion read. “Charges require specific allegations and then proof. We have neither here.”

Another Trump campaign lawyer, Jenna Ellis, later Friday tweeted a joint statement with Giuliani claiming, “The activist judicial machinery in Pennsylvania continues to cover up the allegations of massive fraud.”

Ellis’ tweet adds, “On to SCOTUS!” referring to the Supreme Court of the United States.

Rather than argue that fraud had been committed in Pennsylvania, the Trump campaign’s federal lawsuit had instead alleged that mail-in ballots had been handled differently in counties that skewed toward Democrats versus those that leaned more Republican. The campaign also alleged that some observers watching the counting of votes at polling locations had been unfairly restricted.

Brann, in his written decision, said that the campaign’s lawyers failed to present “compelling legal arguments and factual proof of rampant corruption” in their unprecedented bid to invalidate millions of ballots.

In its appeal to the 3rd Circuit, the Trump campaign did not request that Brann’s ruling be reversed. Instead, the campaign requested that it be allowed to submit an amended version of its legal complaint in order to “restore claims which were inadvertently deleted” from a previous version.

But even that pared-down argument was rejected by the appeals court.

“The Campaign appeals on a very narrow ground: whether the District Court abused its discretion in not letting the Campaign amend its complaint a second time. It did not,” read the opinion written by Stephanos Bibas, whom Trump nominated to the bench in 2017.

The appellate court wrote that “most of the claims” in the Trump campaign’s latest complaint “boil down to issues of state law.”