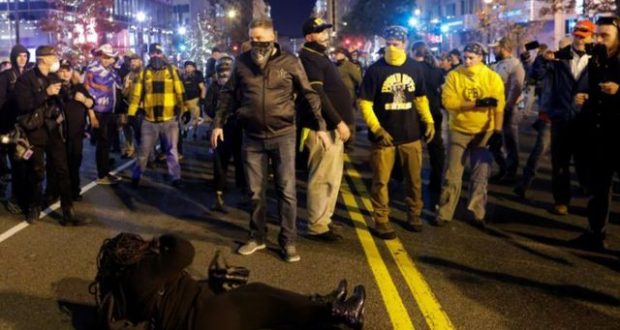 Police have arrested a suspect they said is connected with fireworks that went off at a D.C. restaurant on Saturday, hitting Trump supporters after the “Million MAGA March,” Fox News reports.

A video of the incident shows a large crowd descending on P.J. Clarke’s restaurant just a few blocks away from the White House. Amid a heated confrontation between a small group of Trump supporters and a hostile crowd, someone sets off fireworks that explode on the patio. It wasn’t immediately clear whether anyone was injured.

On Sunday, police said they have arrested 26-year-old Javien Michael Dawson in connection with the fireworks, WRC-TV reported. He had been charged with assault with a dangerous weapon.

It was one of more than 20 recorded arrests after the violence that ensued hours after tens of thousands of Trump supporters gathered in Washington to offer Trump support and urge him not to concede the election.

Previous: APC has failed woefully, it must not return in 2023- PDP”s spokesman
Next: 2023 Presidency: PDP yet to take decision on zoning-Spokesman