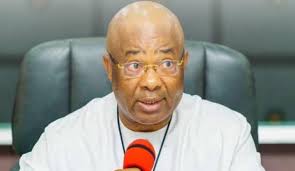 The major opposition, the Peoples Democratic Party (PDP) in Imo State, has dismissed the claim by the Hope Uzodinma-led government that members PDP moving in thousands to the ruling party.

The release said, “Senator Hope Uzodinma has continued to embark on a wild goose chase while issues of overriding interest to Imo people are outrightly neglected.

“His latest pastime is to sponsor fake news about defections of PDP members to his own faction of APC in the state. It is his thinking that Imo people can be persuaded to accept his illegitimate reign and join the ongoing show of shame in Imo which is wrongly described as governance.

“The governor’s obsession with propaganda only exposes his weakness to governance.

“Background check from our party would quickly reveal the so-called chieftains were not members of the PDP and never took a single supporter to him.

“What is true and pathetic is that the governor has created so much poverty and hunger in the land that he now baits a few unprincipled politicians with crumbs and hopes that by doing so, he would become popular. No way!

“Even members of APC have boycotted the registration and revalidation exercise in the state. This is a confirmation that the governor has been completely rejected by Imo people.

“PDP is growing stronger each day and anyone who waits for our members to defect to Uzodinma’s party of abysmal failure is only wasting their time.

Previous: Soludo to INEC: You can’t stop me from contesting in Anambra governoship election
Next: Opeyemi Bamidele denies voting against electronic transmission of results