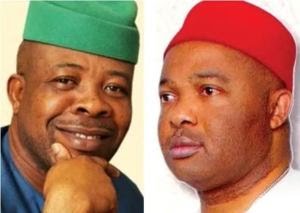 Imo State may soon witness a fierce political showdown between the camps of Governor Hope Uzodinma and his predecessor, Emeka Ihedioha.

The ruling All Progressives Congress (APC) and the opposition Peoples Democratic Party (PDP) may not be spared in the ensuing political melee as prominent chieftains of the two political parties are said to be gearing up to support their own in the face-off that appears like the first salvo in the build up to the next gubernatorial election in the state.

For Ihedioha, it could be the beginning of more trouble, as the Uzodinma-led administration in the state prepares to empower a probe panel to probe his administration’s handling of some financial transaction among many other allegations said to be emanating from ongoing examinations of the activities of the Local Government Joint Accounts Allocation Committee (LGJAAC) in the state during the short-lived administration of the sacked PDP government led by Ihedioha.

The state government, according to a recent claim by the office of the State’s Auditor General for Local Government and Chieftaincy Affairs, is alleging that under Ihedioha, some funds were illegally collected from the Local Government Joint Accounts Allocation Committee (JAAC) by the immediate past governor, Emeka Ihedioha. These funds, the Auditor-General claimed, may not have been properly appropriated and or accounted for.

The Nation also gathered that Ihedioha may also be taken to task on the allegation that he failed to ‘properly’ hand over to the government led by Uzodinma. According to sources within the government, a lot of things as regard how Imo State was run in the months under Ihedioha, were yet to be explained to the new administration.

“This is the major reason there are so many assumptions regarding some very important issues. The new government is left with no choice other than a probe to get these people to come forward and explain some things,” a source said.

But supporters of the former governor are not taking the unfolding political drama lightly as they have no doubt in their mind that it is nothing but a plot to cage the former Deputy Speaker of the House of Representatives ahead of the next gubernatorial election in the state.

“Uzodinma and his APC crowd have started again. They don’t know how to win fairly in politics but to always rely on cheating and lies. But this time, we will defend Ihedioha and other PDP chieftains they have plans to implicate. We will reject any probe,” an ally of the former governor said.

Responding to allegations of witch-hunting by his principal, Simon Ebegbulem, the state’s Commissioner for Special Projects, said “Uzodinma is focused on governance. He is not there to attack anybody. But we will not fail to tell Imo people what transpired in their seven months of fraudulent administration.

I say this, with what has been discovered so far, he is the worst governor. Look at the N19.63 billion local government funds that were misappropriated by the Ihedioha’s men. That was how they looted the funds of the local governments to the detriment of the people at the grass root.”

During the week, Uzodinma finally approved a request from the office of the State’s Auditor General for Local Government and Chieftaincy Affairs, to be empowered to take all necessary steps in recovering the sum of N19.63billion allegedly collected from the Local Government Joint Accounts Allocation Committee (LGJAAC) by the immediate past government in the state, led by Hon. Ihedioha.

A government source had earlier revealed how immense pressure had to be mounted on the governor before he approved the planned probe. According to our source, Uzodinma had been of the opinion that a probe of past administrations, aside from being a distraction, will also heat up the state politically.

“If he had his way, Governor Uzodinma wanted sleeping dogs to lie. But when he was confronted with the implications of some of the financial atrocities allegedly committed by some of the officials being fingered, he had no choice but to cave in,” our source, a former council boss, claimed.

Speaking on the alleged probe plan, Declan Emelumba, the state Commissioner for Information and Strategy, said the fund in question was discovered during a routine audit of the Accounts and Records of JAAC with the Bureau for Local Government and Chieftaincy Affairs by the LGA Auditor General for the 2019 fiscal year.

“And in line with the new Imo agenda to entrench a resilient and transparent public service to the state, the governor had to give the approval for the investigation,” he said.

“There is a withdrawal of over N2.405billion by the same Bureau for LGA and Chieftaincy Affairs. N9.378billion paid for an undisclosed purpose. One Mr. Anyama and Co. received N245million also for non-disclosed purposes.

The Principal Secretary to the immediate past governor was also alleged to have received the sum of N25million twice in December 2019 as a security vote whereas such funds were not paid from JAAC accounts.

Adding that the money was illegally withdrawn from the JAAC account without any Memorandum of Understanding (MOU) or Store Receipt Vouchers (SRV) or Store Issue Vouchers (SIV) in accordance with extant laws, the commissioner mentioned some persons and companies said to have been fingered in the illegalities. He described the development as shocking and the height of embezzlement within seven months of his stay in government.

Expectedly, the decision is being received differently by most supporters of the two leading political parties in the state even as political analysts warn the gladiators to be wary of politicizing governance so as not to sacrifice accountability and probity on the altar of political expediency.

Ike Madunagu, State Director of Voters’ Right Agenda (VRA) warned that “should those asking the governor to forget the probe have their way, Imo would have successfully laid the foundation for the growth of corruption in leaps and bounds.”

To probe or not to probe?

But speaking recently, Ihedioha accused the state governor, Sen. Hope Uzodinma, of feeding Nigerians with lies on the true state of affairs in the state. In a statement by his Chief Press Secretary, Chibuike Onyeukwu, Ihedioha said Uzodinma has resorted to making claims that are false, unfounded and misleading.

Also, Honourable Ray Emeama, Imo State Secretary of the PDP would have none of such submission. As far as he is concerned, Governor Uzodinma has been out to victimize his predecessor right from his very first day in office.

Emeama said the PDP will not fold its arms and watch Uzodinma and the ruling party lie against Ihedioha and other PDP chieftains.

He accused the APC in the state of bad politics and claimed that Uzodinma once banned former governor Ihedioha from entering the state. “Uzodinma and the APC are harassing and intimidating members of PDP, to the point of once beating up women who were at the airport to receive Ihedioha back into the state.

However, Ebegbulem will want those getting set to oppose the probe to consider the allegations first. “What the government is doing now that is very important is the cleaning of the rot we discovered both in the state and local governments that they padded names of workers.

You see a situation where billions of naira criminally go into the pockets of individuals. Because the governor wants to pay salaries as at when due and equally provide the dividends of democracy that he promised Imo people, the governor decided to look into the books.

“We found out several shady deals in the payment of workers in the state. You have a situation whereby one person was earning salaries in different banks with one name. The same thing applies in the councils where one person will be receiving salaries from two or three local government areas.

We found out that the wage bill of local government areas have increased astronomically while there was ban on employment by the previous administrations and people are retiring, still the wage bill is going up.

“For instance, in Ihitte/Uboma, a rural local government, you see a situation the salary wage bill of Ihitte/Uboma, is N58 million while that of Owerri municipal in the state capital is less than N25 million. With what has been discovered so far, at the state level, the government will be saving about N750 million monthly.

By the time it is concluded you can imagine what will be saved. You can imagine the N187 million worth of car bought by Ihedioha while the workers in Imo State were suffering,” he lamented..