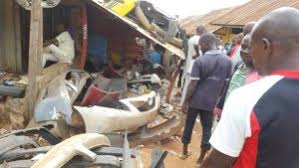 Violent protests have been reported in Oji-River and New Haven in Enugu North local government areas during the conduct of the Enugu State Local Government election.

Why? Both communities erupted over alleged non-inclusion of units’ result sheets.

ENSIEC office in Oji-River came under siege and security operatives at the venue used tear-gas to disperse voters, observers, journalists and other stakeholders.

The protest started when some politicians insisted that the exercise would not commence until the result sheets were provided.

However, the situation was brought under control when the Commissioner of Police, Mohammed Danmallam, arrived at the area.

In New-Haven, voting did not start until 2 p.m. at Amoli in Awgu Local Government and Achara Layout in Enugu South.

The Commissioner for Information, Ogbuagu Anikwe, said that the materials arrived at Agwu early, but six buses loaded with some suspected thugs disrupted the distribution of the materials at the council headquarters.

Anikwe also alleged that they held ENSIEC officials hostage till about 1 p.m. before they were dispersed by security operatives after a distress call.

Also at Achara layout, the materials arrived at about 2:02 p.m, but accreditation and voting did not commence till 2:36 p.m.

At Ogrute in Igboeze North, there was massive turn-out of voters while at Akwu-Achi in Oji-River, the exercise was yet to commence.